Pclouds (PrivateClouds) allow a tenant to allocate all of the capacity of a host for their exclusive use. The host remains part of the Nova configuration, i.e this is different from bare metal provisioning in that the tenant is not getting access to the Host OS - just a dedicated pool of compute capacity. This gives the tenant guaranteed isolation for their instances, at the premium of paying for a whole host.

The Pcloud mechanism provides an abstraction between the user and the underlying physical servers. A user can uniquely name and control servers in the Pcloud, but then never get to know the actual host names or perform admin commands on those servers.

The initial implementation provides all of the operations need create and manage a pool of servers, and to schedule instances to them. Extending this further in the future could allow additional operations such as specific scheduling policies, control over which flavors and images can be used, etc.

Pclouds are implemented as an abstraction layer on top of Host Aggregates. Each host flavor pool and each Pcloud is an aggregate. Properties of the Host Flavors and Pclouds are stored as aggregate metadata. Hosts in a host flavor pool are not available for general scheduling. Host are allocated to Pclouds by adding them into the Pcloud aggregate. (they may also be in other types of aggregates as well, such as an AZ). All of the manipulation of aggregates including host allocation is performed by the Pcloud API layer - users never have direct access to the aggregates, aggregate metadata, or hosts. (Admins of course can still see and manipulate the aggregates) 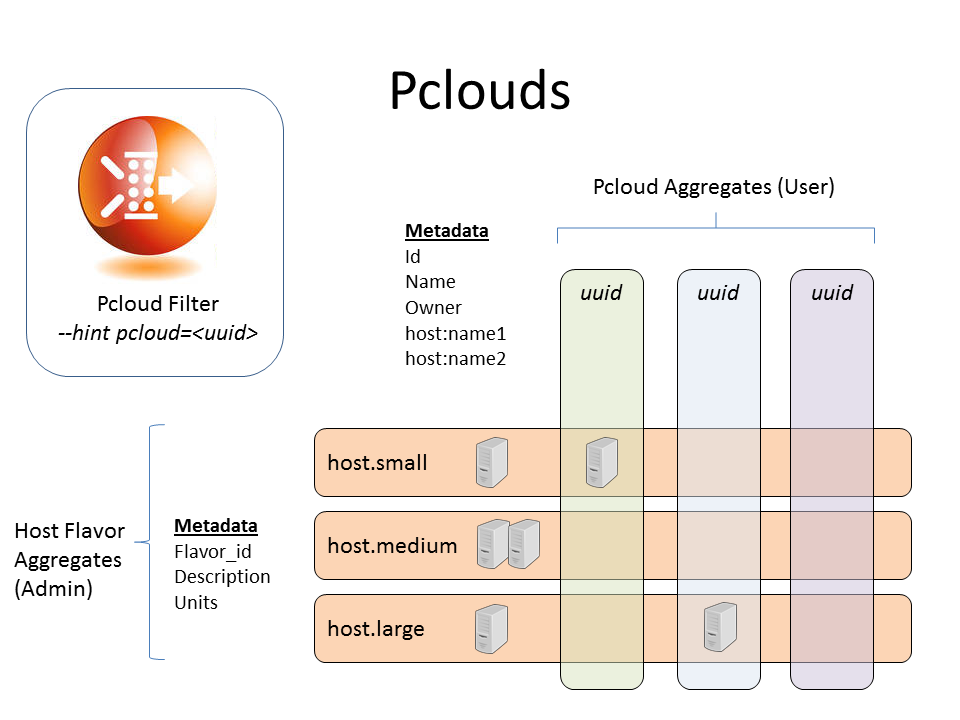 The Cloud Administrator can:

A Tenant that has been authorized by a Pcloud can:

Host flavors define the types of hosts that users can allocate to their Pclouds (c.f. flavors for instances). Because physical host have fixed characteristics a host flavor is defined by just three properties:

Host Flavors are implemented as aggregates with the name "Pcloud:host_flavor:<id>", and have the following metadata values:

A Pcloud is in effect a user defined and managed aggregate. However the Pclouds API provides an abstraction layer to control ownership and provide authorization schematics, and encapsulate system system properties such as host names. On creation a Pcloud is assigned a uuid, which forms part of the aggregate name and provides the Pcloud ID for users to use in the API.

Pclouds are implemented as aggregates with the name "Pcloud:<uuid>", and have the following metadata values on creation:

Because the allocation occurs in the API sever, there is a risk of a race condition when two allocation requests are processed at the same time. The Pcloud API provide a protection against this by:

In order to remove a host from a Pcloud it must be empty (so that it can be used by another Pcloud) and in order to empty it the Pcloud owner must be able to prevent further instances from being scheduled to it. Pclouds therefore provide a simple enable / disable mechanism for hosts, which is recorded in the metadata and implemented by the Pcloud filter. The underlying service enable / disable is not used so that this remains available to the System administrators.

A host must be both empty and disabled before it can be removed fro a Pcloud.

The Pcloud Owner can see a list of hosts, their states, and the uuid's of instances on those hosts

The owner of a Pcloud can authorize other tenants to be able to schedule to the Pcloud. Authorizing a tenant adds the following record to the aggregate metadata:

Note that to avoid being limited by the metadata record size a separate metadata value is created for each authorized tenant. Note that owner of a Pcloud is automatically added as an authorized tenant and creation time, but they can remove themselves if required.

Where a scheduler filter can be configured by aggregate properties its possible to provide that configuration on a per Pcloud basis. Currently the Core Filter and Ram Filter support per Aggregate configuration, and so the Pcloud API provides the capability to set the appropriate values on the underlying aggregate

Scheduling is controlled by the PcloudFilter, which must be configured as part of the filter scheduler.

A User requests an instance to be scheduler to a Pcloud by passing the scheduler hint "pcloud=<pcloud_uuid>".

The Pcloud filter implements the following rules for each host: