The Tricircle provides an OpenStack API gateway and networking automation to allow multiple OpenStack instances, spanning in one site or multiple sites or in hybrid cloud, to be managed as a single OpenStack cloud

Some enterprises also found issues for applications running in remote centralized cloud, for example for video editing, 3D modeling application and IoT service etc which bandwidth and latency are sensitive.

For Enterprise, most of the employee will work in different branches, and access to the nearby edge cloud, and collaboration among employee from different branch leads to the requirement on cross edge cloud functionalities, like tenant level networking, data distribution and migration.

NFV(network function virtualization) will provide more flexible and better customized networking capability, for example, dynamic customized network bandwidth management, and also help to move the computing and storage close to end users. With shortest path from the end users to the storage and computing, the uplink speed could be larger and terminate the bandwidth consumption as quick as possible, will definitely bring better user experience, and change the way of content generation and store: real time, all data in cloud.

For example, an user/enterprise can dynamically ask for high bandwidth/storage requirement for streaming the HD video/AR/VR data into the cloud temporarily, after finishing streaming, ask for more computing resources to do the post processing, and re-distribute the video to other sites. And when a user want to move/re-distribute the application and data from one edge cloud to another one, should be able to dynamically ask for cross edge cloud bandwidth managed by NFV.

Current Internet is good at processing down-link service. All contents are stored in remote centralized data centers and to some extent the access is accelerated with CDN.


As more and more users generate content uploaded/streamed to the cloud and web site, these contents and data still have to be uploaded/streamed to some centralized data centers, the path is long and the bandwidth is limited and slow. For example, it’s very slow to uploading/streaming HD/2k/4k video for every user concurrently. For pictures or videos, they have to be uploaded with quality loss, and slow, using cloud as the first storage for users data has not the choice yet, currently it’s mainly for backup, and for none time/latency sensitive data. Some video captured and stored with quality loss even lead to the difficulty to provide the crime evidence or other purpose. The last mile of network access (fix or mobile) is wide enough, the main hindrance is that bandwidth in MAN(Metropolitan Area Network) and Backbone and WAN is limited and expensive. Real time video/data uploading/streaming from end user/terminal to the local edge cloud is quite attractive cloud service.

From family or personal point of view, the movement or distribution of App/Storage from one edge data center to another one is also needed. For example, all video will be stored and processed in Hawaii locally when I am taking video in travelling, but I want the video after processing to be moved to Shenzhen China when I come back to China. But in Shenzhen, I want to share the video with streaming service not only in Shenzhen but to friends in Shanghai Beijing, so the data and the streaming service can be built in Shenzhen/Shanghai/Beijing too. The dynamically bandwidth incremental and app/data movement/replication can be helped through NFV edge cloud.

The emerging massive distributed edge clouds will be not only some independent clouds, but also some new requirements are needed:

Compared with Amazon, the scalability of OpenStack is still not good enough. One Amazon AZ can supports >50000 servers(http://www.slideshare.net/AmazonWebServices/spot301-aws-innovation-at-scale-aws-reinvent-2014).

Cells is a good enhancement for Nova scalability, but the shortage of Cells are: 1) only nova supports cells. 2) using RPC for inter-data center communication will bring the difficulty in inter-dc troubleshooting and maintenance, no CLI or other tools to manage a child cell directly. If the link between the API cell and child cells is broken, then the child cell is unmanageable.

You have to estimate, calculate, monitor, simulate, test, online grey expansion for controller nodes and network nodes…whenever you add new machines to the cloud. The difficulty is that you can’t test and verify in all size.

The feasible way to expand one large scale cloud is to add some already tested building block. That means we would prefer to build large scale public cloud by adding tested OpenStack instance (including controller and compute nodes) one by one, but would not prefer to unconditionally enlarge the capacity of one OpenStack instance. This way put the cloud construction under control.

Building large scale cloud by adding tested OpenStack instance one by one, but tenant's VMs may need to to be added to same network even if you add a new OpenStack building, or networks will be added into same router even if these networks of the tenant located in different OpenStack building blocks. But from the end user and PaaS point of view, they still want to use OpenStack API for already developed CLI, SDK, Portal, PaaS, Heat, Maganum, Murano etc. This way of building large scale public cloud also brings some new requirement to OpenStack based cloud which is quite similar like that in massive distributed edge clouds:

The detailed use cases could be found in this presentation: https://docs.google.com/presentation/d/1UQWeAMIJgJsWw-cyz9R7NvcAuSWUnKvaZFXLfRAQ6fI/edit?usp=sharing

More technical use cases could be found in the communication material used in Tricircle big-tent project application: https://docs.google.com/presentation/d/1Zkoi4vMOGN713Vv_YO0GP6YLyjLpQ7fRbHlirpq6ZK4/edit?usp=sharing

And also can meet the demand for several working group: Telco WG documents, Large Deployment Team Use Cases, and OPNFV Multisite Use Cases

The Tricircle provides an OpenStack API gateway and networking automation to allow multiple OpenStack instances, spanning in one site or multiple sites or in hybrid cloud, to be managed as a single OpenStack cloud.

The Tricircle is the formal open source project for OpenStack cascading solution ( https://wiki.openstack.org/wiki/OpenStack_cascading_solution ) but with enhanced and decoupled design.

The Tricircle could be extended to support more powerful capabilities such as support the Tricircle instance being virtually splitted into multiple micro instances which could enable user to have a more fine granularity on the tenancy and service. And the Tricircle also enables OpenStack based hybrid cloud.

Now the Tricircle is designed as standalone service which is decoupled from OpenStack existing services like Nova, Cinder, Neutron. The design blueprint has been developed with ongoing improvement in https://docs.google.com/document/d/18kZZ1snMOCD9IQvUKI5NVDzSASpw-QKj7l2zNqMEd3g/edit?usp=sharing, 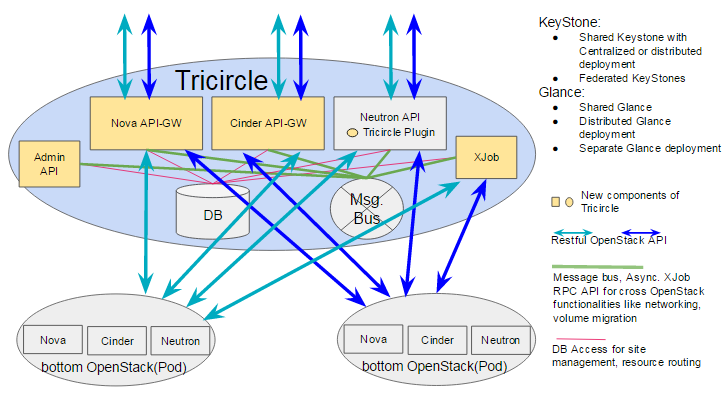 The motivation to develop the Tricircle open source project:

The cascading solution based on PoC design with enhancement has been running in several production clouds, which showed the value of one OpenStack API gateway layer with networking automation functionality above multiple OpenStack instances, no matter in large scale centralized cloud scenario, or distributed enterprise application located in the distributed edge clouds, even hybrid cloud scenario:

Set up the Tricircle in 3 VMs with virtualbox in Ubuntu 14.04 LTS. Install Tricircle in VirtualBox.
Or refer to installation guide in https://github.com/openstack/tricircle for single node/two nodes setup using devstack.

Q: What is the difference between Tricircle and OpenStack Cascading?


OpenStack Cascading was mainly a solution used in a PoC done in late 2014 and early 2015, which aims to test out the idea that multiple OpenStack instances COULD be deployed across multiple geo-diverse sites, and managed by an OpenStack API layer, which was based on OpenStack services. After the PoC was carried out successfully, the team then planned to contribute the core idea to the community.

Tricircle was born out of that idea, however got a different shape and focus. Unlike what is implemented in the V1 of OpenStack cascading solution in the PoC, which has plenty twists and plumbers of feature enhancements, Tricircle in its earliest stage tries to build a clean architecture that is extendable, pluggable and reusable in nature.

In short, OpenStack Cascading is a specific deployment solution, while Tricircle represents a standalone project with decoupled group of services, like any other OpenStack project for example Neutron, Nova or Glance, etc, that in the future could be applied to OpenStack Ecosystem.

Q: What is the goal of Tricircle?


In short term, Tricircle would focus on developing a robust architecture and related features, in a long run, we hope we could successfully establish a paradigm that could be applied to the whole OpenStack community