The following is the proposed plan for design and implementation of the MPLS VPN as a Service feature in OpenStack Networking for the Havana release.

Why MPLS VPN In OpenStack

2. MPLS is widely supported by backbone devices: Generally, core nodes in backbone have the ability to deploy MPLS tunnels.

In era of cloud computing, tenants have more and more data interactions with datacenter network, and also secure connections, QoS and elastic adjustment are needed. Consequently, MPLS tunnel is a better solution to construct VPN through backbone.

The Definition of "VPN Service" in this BP may be out of date,we will renew it later.

Welcome to join us

We focus on MPLS VPN in OpenStack,if you have any interest or questions in this BP,please contact us:

We consider that the MPLS VPN in WAN have been established by ISP(or other provider),so we just need to consider how a tenant’s subnet could access the MPLS VPN .We use term of MPLS VPN Access Connection to represent the connection between a neutron router(which connects a subnet or just a vm of a tenant) and a PE.Also,a MPLS VPN Access Connection can represent the connection between a vendor’s hardware device(a CE router) and PE.

If there are no hardware devices in OpenStack as a CE devices.Then we combine quagga and Neutron router to make Neutron a CE access router.This implementation need no specific hardware device. 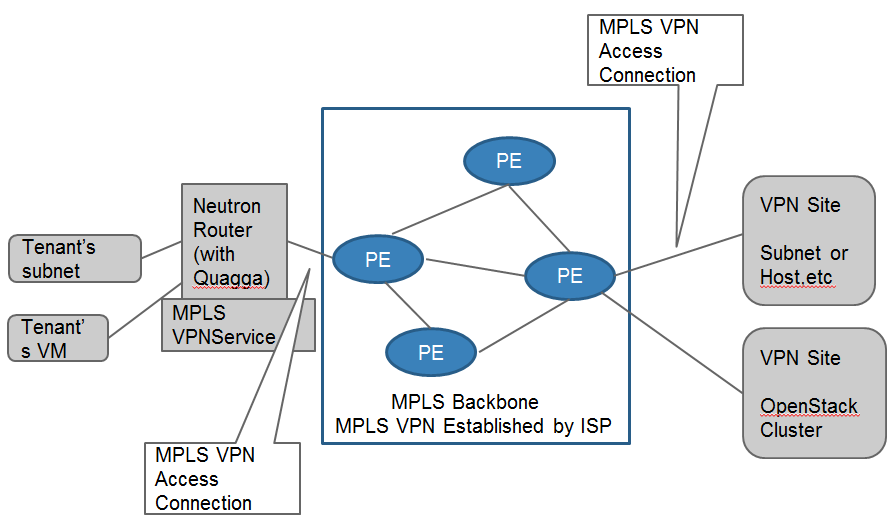 If there are vendor’s hardware devices in OpenStack,a vendor need to provide its driver,which will configure vendor’s devices to access MPLS VPN. 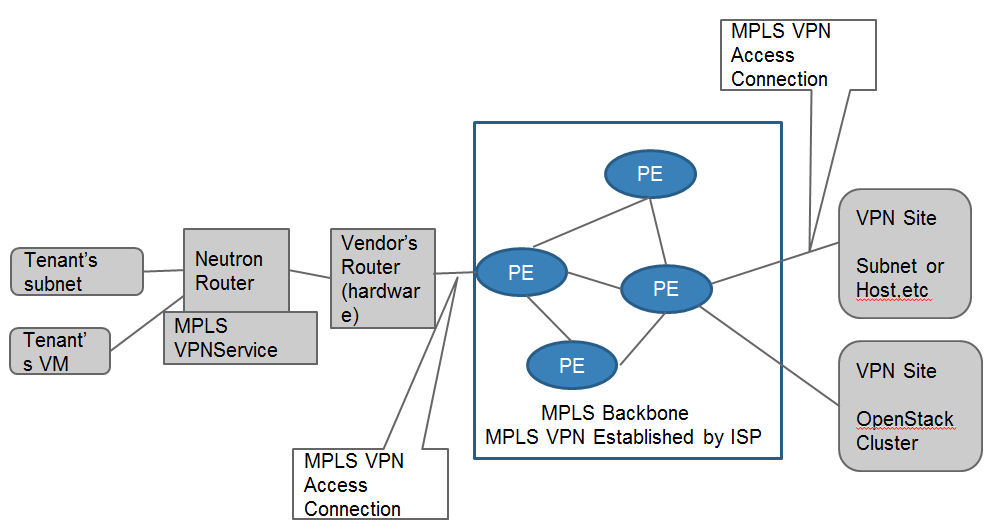 In Neutron, a tenant can create routers for subnets or tenant and define the connections between subnets,these are all done by Neutron Router.

According to RFC-4364 BGP/MPLS IP Virtual Private Networks (VPNs),to implement MPLS VPN in Neutron, we need a Quagga instance to corperate with Neutron Router,then this Quagga Router will exchange routes from PE(or run some protocols such as BGP etc…), finally a tenant’s subnet or vm will access MPLS VPN.

Below shows the architecture of Neutron MPLS VPN: 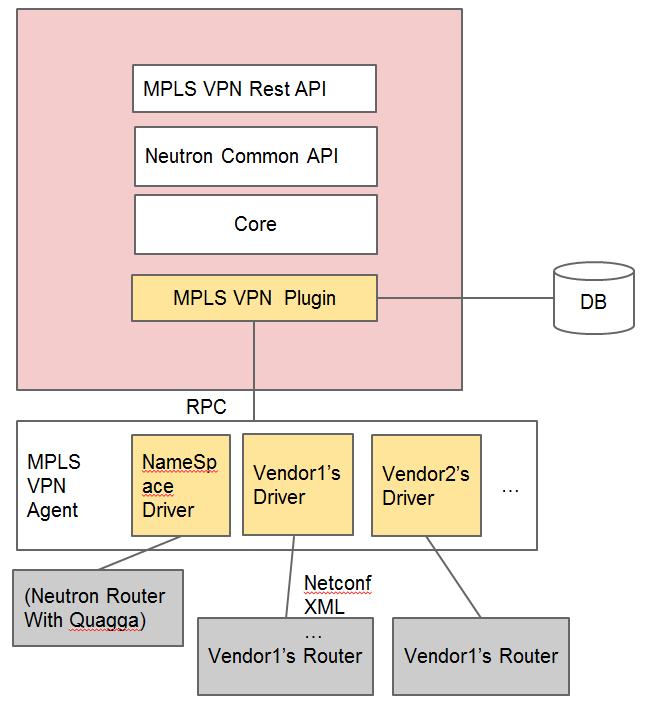 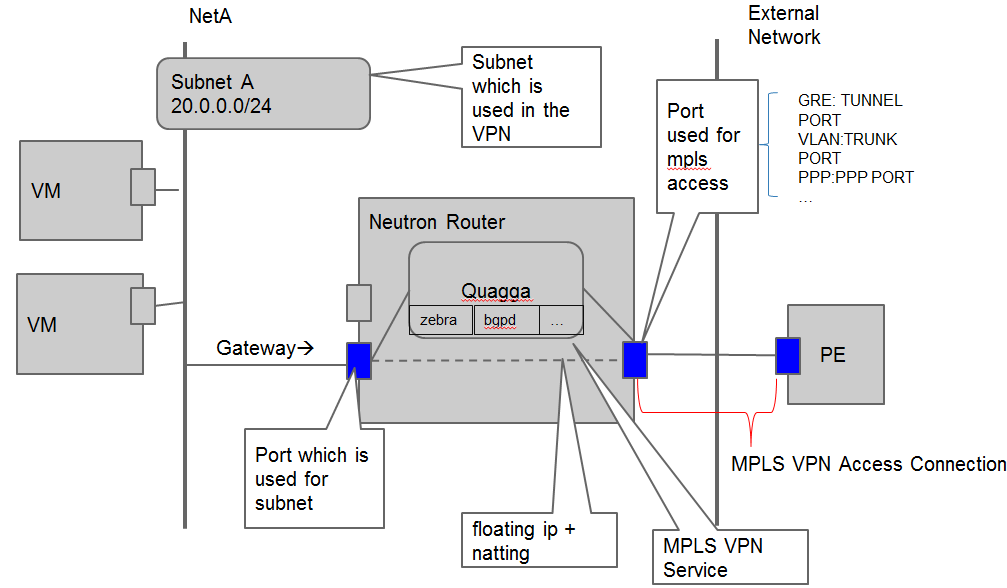 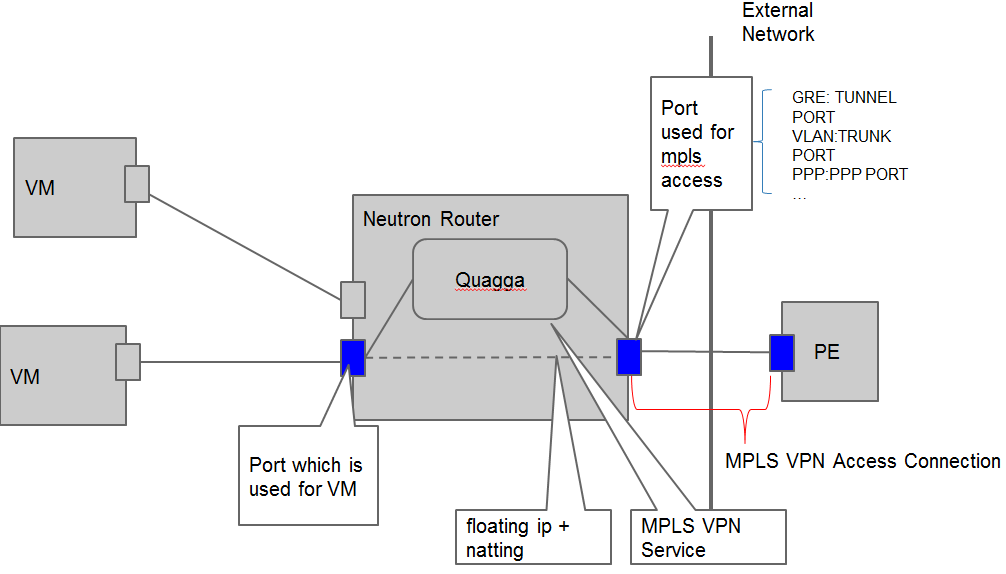