Mercador is a system for federating independent OpenStack clouds. The name comes from the Portuguese word for merchant.

The basic consumption model for cloud services is a simple two-party interaction between a Cloud Service User (CSU) and a Cloud Service Provider (CSP). The CSP deploys a set of services and publishes them though a standard interface supporting UI, CLI, and API. The CSU subscribes to this bundle of services (using a mechanism that is generally out of scope for OpenStack), and consumes the services via the published interfaces. No matter how complex or geographically distributed the services, they are all owned and operated by a single legal entity, which has complete control over how they are configured and managed.

A number of use cases are emerging which require us to extend this model. CSPs operating private clouds wish to provide uniform access for their users to both private and public cloud services. A CSP operating in one geography wants to offer services hosted in a different country (for data sovereignty reasons); rather than setting up an OpenStack cloud in that country, it elects to source those services from another CSP. A telco decides that it wants to offer cloud services to its customers, but doesn't have the expertise to do so; instead it prefers to resell services from one or more CSPs under its own brand. A research consortium wants to aggregate cloud services from several university CSPs and present the aggregated services to its users through a "single pane of glass".

The common pattern in all of these cases is that we need to be able to take a bundle of resources and services from one CSP and make them available to a second CSP in such a way that they can be treated as part of the second CSPs service offering. A CSU should be unaware whether the services being consumed are implemented by the CSP with which they have a contractual relationship or by a third party. In the extreme case of a CSP acting as a pure reseller, they may not operate any services for themselves.

There are five important principles which affect the way in which Mercador is being developed.

Widget wishes to provide OpenStack services to its developers to build in-house applications. For business reasons, it wants to use multiple cloud providers, but it wants to provide its developers with a single, consistent user experience. It contracts with Cumulus and Cirrus to provide OpenStack services. It deploys a Service Aggregator which allows Chris and Pat to use a single Horizon and Keystone to access the two clouds.

Nimbus decides to raise revenue by reselling some of its IaaS capacity. However it does not want the complications of sales, support and billing to end users. Instead it contracts with Acme to resell its OpenStack services.

Cirrus wishes to add a new OpenStack service, BDaaS (using Sahara). However it has no in-house expertise in supporting big data applications. Cirrus decides to subcontract the resale of OpenStack services with BDaaS to Acme, while preventing its existing customers like Widget from having access to BDaaS. It does this by creating two Virtual Regions. One Virtual Region includes BDaaS, and is made available to Acme; the other does not, and is provided to Widget.

Cumulus suffers a major outage, and Widget decides that it needs to switch to another provider. It contracts with Acme to provide OpenStack services. Acme satisfies this contract using services from Nimbus (Story #2). Widget reconfigures its Service Aggregator, replacing the Cumulus configuration with one for Acme.

A user (CSU) normally interacts with a cloud service provider (CSP) by logging in to the Horizon user interface, and accessing compute, network, and storage resources in an OpenStack region. The Keystone service handles identity management (IDM) functions, and provides the endpoints to interact with the services in the region. (In these diagram, dashed lines denote independent actors.) 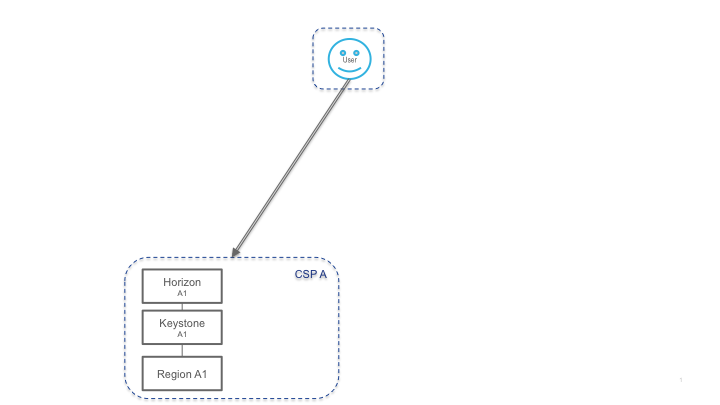 A CSP may deploy more than one region, and share the Horizon and Keystone services across all regions. The user logs in to Horizon, selects a region to work in, and then obtains a Keystone token for the selected region. This provides single sign-on access. However, all regions are managed by a single CSP, and the configuration is static. (Note that this depends on a Horizon configuration in which the list of regions is obtained from Keystone. It assumes that all regions share the same Keystone. This is incompatible with the Horizon AVAILABLE_REGIONS mechanism.) 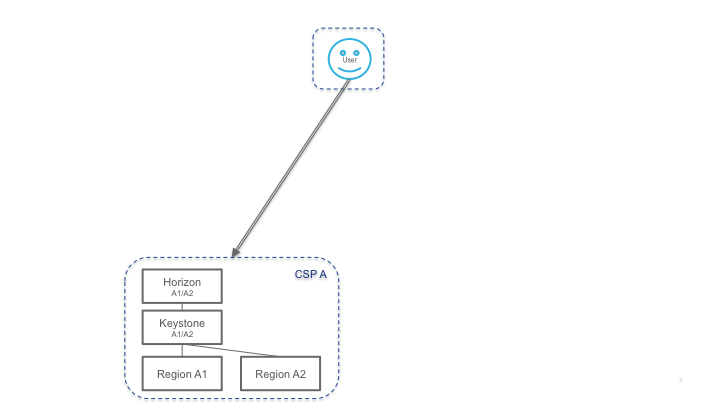 A user can work with with two different (independent) CSPs, but there is no shared context; she has to log in to each Horizon as a distinct session. 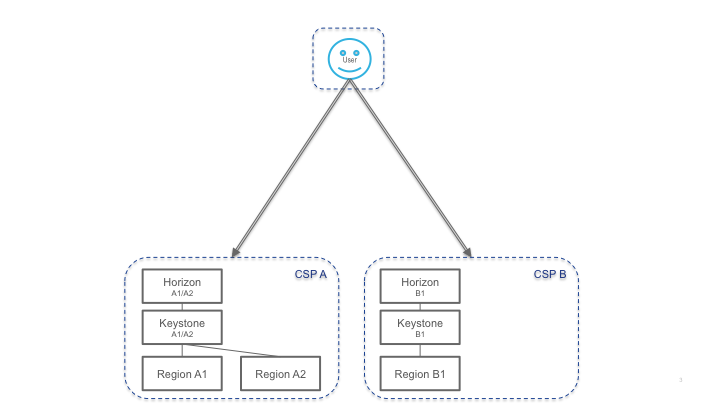 Let us suppose that Region B1 (operated by CSP B) has some attractive feature – geographical location, or connectivity – and CSP A would like to offer this service to its customers. Ideally, it would like region B1 to appear as just another region in Horizon, with the same SSO as for regions A1 and A2.

Setting this up is obviously non-trivial. Negotiating resource quotas. Coordinating project and user namespaces. Configuring IDM. And the OSS and BSS systems (out of scope for OpenStack) must be connected. Ideally, we want to be able to set things up dynamically: to discover a suitable region, and include it in the available resources.

In addition, CSP B is unlikely to be willing to provide unrestricted access (including full admin rights) for region B1. Instead B will want to provide access to a subset of resources, services, and administrative privileges. We call this package a virtual region 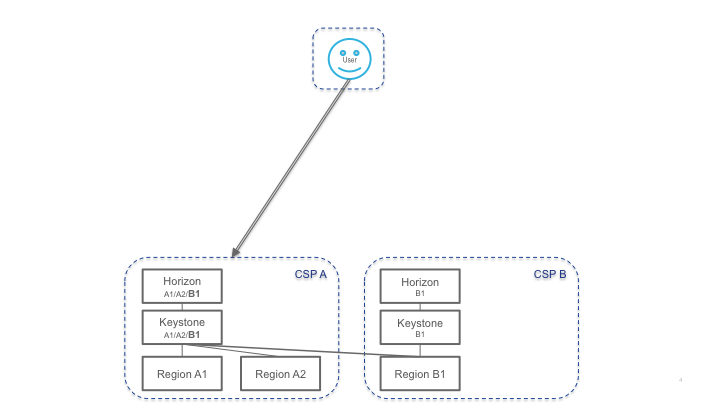 To manage the process of providing access from one CSP to the resources of another, we introduce two new services: 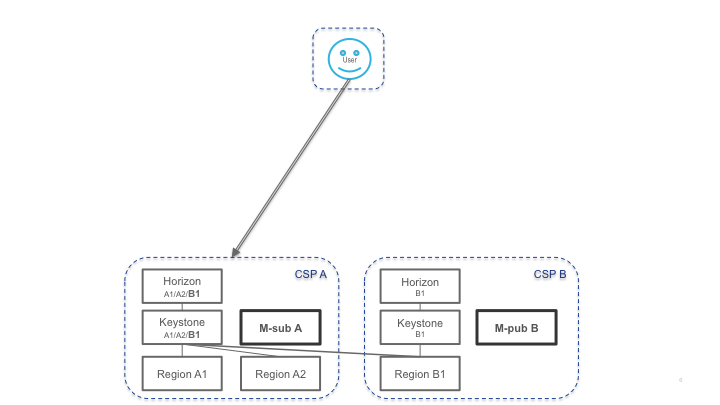 The primary workflow proceeds as follows: 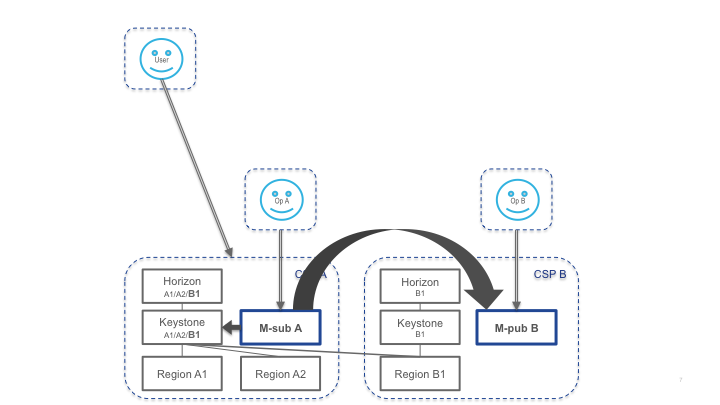 With this mechanism, there’s no reason that a “CSP” has to actually provide any local resources at all. Here we have a service aggregator -- a reseller, or broker -- which sources all of its regions from other CSPs. To the user, it looks just like any other CSP – UI, SSO, APIs. All applications are required to run without any change. 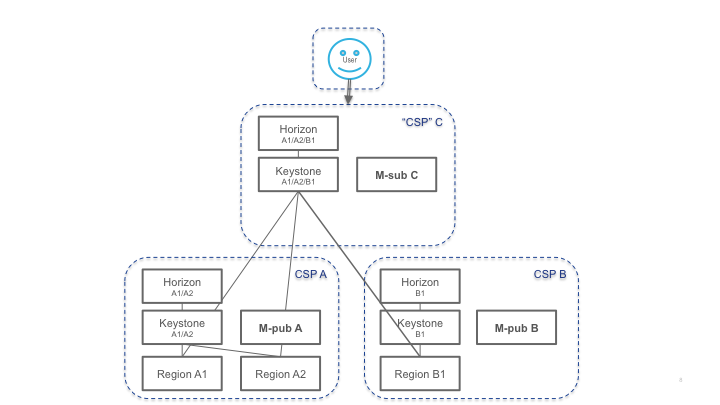 The goal is that any OpenStack CSP can take part in this system by deploying the M-pub and/or M-sub services, and that the results will pass RefStack. It must be emphasized that there will be various OSS/BSS requirements to be satisfied for federated operations. This project simply addresses OpenStack.

The CSPs in the Mercador architecture are independent entities - typically distinct legal entities, possibly subject to different legal and compliance regimes. They also have business relationships with their existing customers which cannot be compromised.

A user of CSP A expects that their personal information is held only by CSP A, and not shared with CSP B. She will sign in to CSP A, using whatever IdP CSP A supports. If CSP A chooses to support the user with resources hosted an a virtual region operated by CSP B, it is important that the information shared with CSP B is (a) clearly identified, (b) minimized, and (c) potentially anonymized. In particular, CSP B must not require access (or even know about) the IDM context in CSP A. We assume that CSP B will use Keystone-to-Keystone to handle this, and that M-sub will supply the necessary information to M-pub in order to set up Keystone A.

The intention is a virtual region will behave the same - functionally and operationally - as a regular region. Today this isn't possible, because of domain and project name space limitations.

An administrator for CSP A needs to be able to manage the resources of her local users whether they are hosted in a "regular" region or a virtual region. The subscription process for a virtual region has to include steps to create the identity and roles necessary to provide this capability. One approach is to use nested domains. The vregion B1 is defined in terms of a domain, B1-D1. CSP B's M-pub can create a local (CSP B) user, and give this user admin rights in this region. It can then create a subordinate domain, B1-D1-Da, for which the IdP is set to CSP A's Keystone. This ensures that the CSP A admin can log in to CSP B and administer the vregion even if K2K has failed for some reason.

Creating a subdomain in a subscribed vregion

Creating a project in a subdomain of a subscribed vregion

User selecting a project in a vregion

User creating a Nova instance in a project in a vregion

There are three Stackforge repositories, corresponding to the publisher, subscriber, and CLI components:

For various reasons, we've decided that the proof-of-concept implementation of Mercador is going to be based on forked copies of Keystone and the CLI clients openstackclient and keystoneclient The repository can be found here:

The following Trello page is used for project task tracking:

The agenda and other information can be found here.