Currently, many vendor storages have vendor specific cinder driver and these drivers supports rich features to create/delete/snapshot volumes. On the other hands, there are also many storages which do not have specific cinder driver. LVM is one of an approach to provide light weight features such as volume creation/deletion/extend, snapshot, etc. By using "cinder LVM driver" with "a volume-group on shared storage volume", cinder will be able to handle these storages.

The purpose of this blue print is support of storages which does not have specific cinder driver using LVM and VG on shared storage volume.

When a volume-group on a shared storage volume(over fibre, iscsi or whatever) is visible from all nodes such as a cinder node and compute nodes, these nodes can access the volume-group simultaneously(*1) without software iSCSI target.

If LVM driver support this type of volume-group, qemu-kvm on each compute node can attach/detach a created LV to an instance via device path of “/dev/VG Name/LV Name” on each node, without a need of software iSCSI operations.(*2)

So the enhancement will support “a volume-group visible from multiple nodes” instead of iSCSI target.

Benefits of this driver

A volume-group visible from multiple nodes 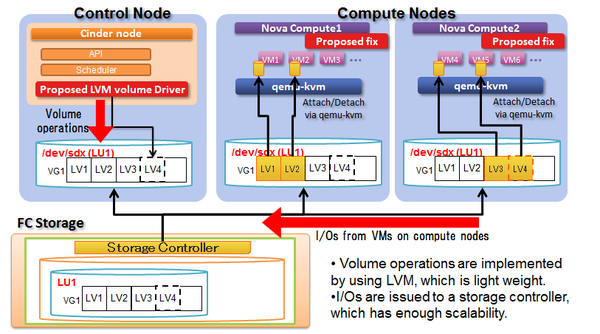