Embedded sectors such as Automotive, Industrial, professional audio/video networking as well as blockchain and high frequency trading have emphasized the need for real-time networks. While Common LAN models are based on Internet Protocols and the IEEE 802 architecture and most of operation is best-effort which is not suitable for use cases (special for edge computing) that require high /known/deterministic availability.

Time Sensitive Networking (TSN) is a set of evolving standards developed by IEEE 802.1 Working Group to cover a group of vendor-neutral and IEEE standards with the aim of guaranteeing determinism in delivering time-sensitive traffic with low and bounded latency within an infinitesimal packet loss over the network, while allowing non time-sensitive traffic to be carried through the same network. It is also a key technology that targets for above edge computing segments.

StarlingX (STX) is a complete cloud infrastructure software stack for the edge and it provides running workloads on both virtual machine and container environment.

This Wiki introduces how to deploy and run TSN application in STX virtual machine workload, sample TSN reference applications are taken from [1] with focus on 2 key use cases:

The TSN reference application had been verified on the following environments:

The following diagram shows the setup for the demo: 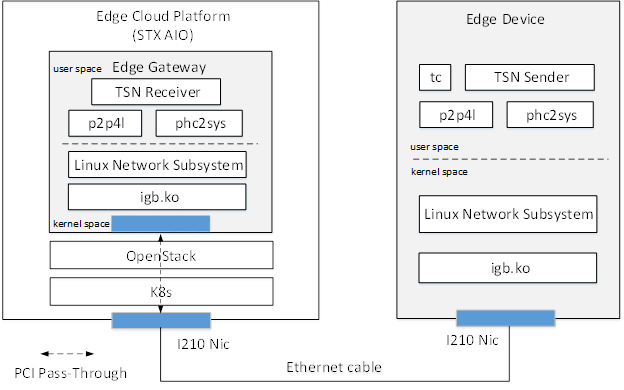 The demo includes below hardware and software components:

Walk through to deploy TSN applications on STX

Create image tsn_ubuntu_19_04.img based on Ubuntu 19.04 with below required binaries:

Note: other configurations besides pci in nova_compute hosts such as libvirt, vnc (which are configuration generated based on STX compute node information) are also required due to the override mechanism of openstack-helm for list (e.g. hosts) which will replace all content of the list instead of replace single configuration item for each list element.

Following the instructions on [1] to compile and install below applications in the VM instances:

(2) simple_listener: TSN test application which receives IEEE1722 class A traffic, and it is used to test IEEE 802.1Qav or Credit Based Shaper use case

(3) sample-app-taprio: TSN test application which receives traffic and measure Tx latency, and it is used to test IEEE 802.1Qbv or Time Aware Shaper use case

Following the instructions on [1] to compile and install below applications in the device:

(2) simple_talker-cmsg: TSN test application which sends IEEE1722 class A traffic, and it is used to test IEEE 802.1Qav or Credit Based Shaper use case

(3) sample-app-taprio: TSN test application which sends scheduled traffic, and it is used to test IEEE 802.1Qbv or Time Aware Shaper use case

This demo focuses on the use of Credit Based Shaper (CBS) and the LaunchTime feature of Intel® Ethernet Controller I210 to ensure bounded and low latency for time sensitive streams.

It includes 2 scenarios: (1) CBS and LaunchTime are disabled (2) Both CBS and LaunchTime are enabled. ptp4l daemon are running on both Edge gateway and Edge device to sync PTP clock based on IEEE 802.1AS Generalized Precision Time Protocol (gPTP) with Edge gateway serves as grandmaster clock and Edge device serves as slave clock. Phc2sys daemon are also running on both devices to synchronize system clock with PTP clock. simple_talker-cmsg application runs on edge device serves as the source of 8000 packet/s SR Class A audio frames in IEEE 1722 format. Simple_listener application runs on Edge gateway to receive time-sensitive traffic. Iperf3 are running on both devices to transfer best-effort traffic to stress system communication, tc utility is used to setup cbs and etf (for LaunchTime feature) qdisc capabilities.

(1) CBS and LaunchTime are disabled

Enable CBS with below commands:

Enable LaunchTime with below command:

This demo focuses on the use of Time Aware Shaper (TAS) and the LaunchTime feature of Intel® Ethernet Controller I210 to ensure much more bounded and low latency for period control applications.

Create mqprio with below command: 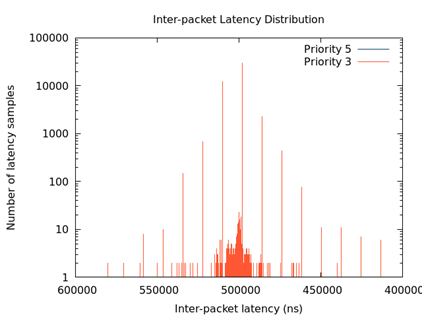 (2) TAS enabled (use taprio qdisc only)

Enable TAS with below command: 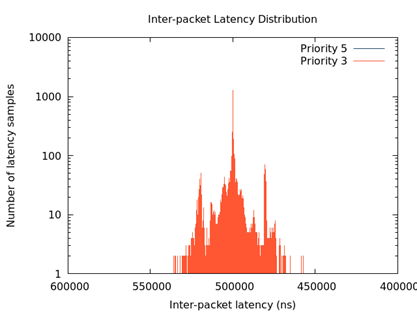 In this case, most of the samples happen at and close to 500 µs. The sample count quickly drops to a single digit value when it is further away from the 500 µs inter-packet cycle time. Compare to case (1), a majority of the scheduled traffic is received at close to 500 µs which shows that taprio qdisc helps traffic shape the transmission of scheduled traffic in the time domain.

Enable LaunchTime with below command: 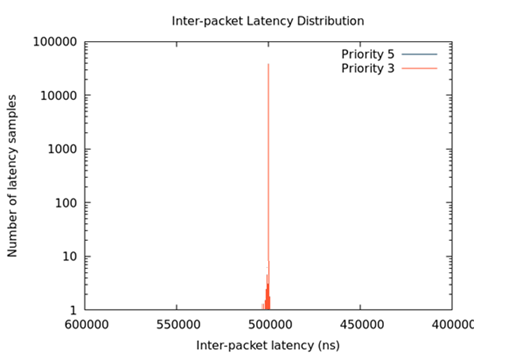