The goal of this blueprint is to implement capabilities in Reddwarf to support the concept of DbaaS Backups, which could be used to support database capabilities (i.e. backups, cloning, etc.). This will be supported in the Reddwarf API (guest_agent) and provide the ability to support snapshots in a consistent view of DB such that it can be used for replication setup, cloning of the Master DB, and/or backup such that a point-in-time restoration can be performed.

There are many methods of implementing a backup design such as: mysqldump with the master-data option, Perconas' XtraBackup, Openstack's volume snapshot, etc.. Each has their advantages and disadvantages. As such the design presented herein will provide for the idea of a pluggable interface such that as capabilities are developed they can be incorporated without code changes. One entities SLA may allow for only a certain type of snapshot due to acceptable down-time, etc.. So in order to offer the most robust possible snapshot implementation this pluggable API present the best of breed.

The following are the design goals:

Backups that are produced as artifacts will be uploaded to Swift. The Auth token presented to Reddwarf will be forwarded to Swift and the snapshot will live within a container in the user's swift account. It is assumed that the user has the necessary Swift Role when attempting to create a Snapshot. Reddwarf will perform a HEAD against Swift, prior to accepting the user's create request.

The ACL will use the Openstack Storage ACLs. ACLs allow us to have greater control over individual objects and containers without requiring full read/write access to a particular container. Granting access control is done on a container basis and is achieved at the role level. When a user creates a container by using the role they are in, other users can be granted that access by adding other roles to the container. In our case the following hierarchal modes applies. From the diagram below it shows each tenant will have one BackupManager role and associated to that role can be many users. Each user has the ability to create a snapshot object in swift and to access it in order to restore a VM's database from it. These users will have to be pre-assigned to the role of the BackupManager prior to use and by a user that has administration duties for that tenant. This way we can ensure that security and isolation between tenants.

Please note that the user's that are to be assigned to have the authority to perform backups and restores must be previously assign to the role of BackupManager first before attempting and backup or restore.

Once assignment to the role of BackupManager a user can use their credentials to create a backup and restore from a previously create backup. In addition, listing of the available backups performed with those credentials can be obtained for only a tenant that this user belongs to.

In the call from the reddwarf API a type shall be exposed that will be use to load the supported implementation.

In order to support the snapshot a database table will be created in the reddwarf database to allow determining the following information:

An example and definition of the of the database table is as follows:

In order to demonstrate the code structure a state diagram has is show in the following diagrams for various process: 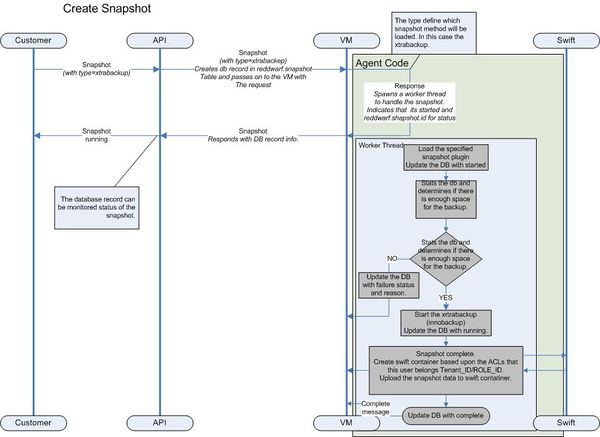 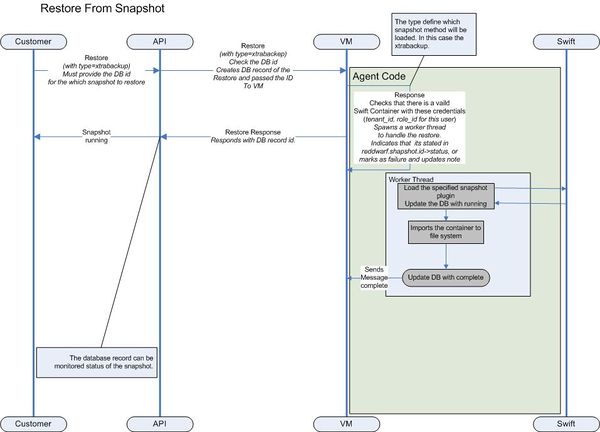 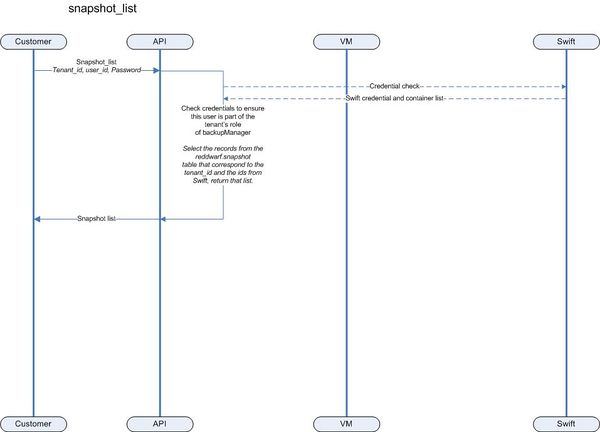 As a Reddwarf User, I need the ability to create a backup of my instance stored in my Swift account so that I can have a full backup of all MySQL data from my instance.

As a Reddwarf User, I need the ability to view a list of all my available backups for all my instances so that I can easily locate previously saved data across all my instances.

GET /backups List all backups for a given tenant id.

As a Reddwarf User, I need the ability to view a list of backups available for a single instance, so that I can locate previously saved data from my instance.

As a Reddwarf User, I need the ability delete a backup, or multiple backups, so that I can remove data no longer needed from my Swift account to save space/money.

As a Reddwarf User, I need the ability to create a new Reddwarf instance from a snapshot, so that I can quickly create a copy on an existing database instance.