Difference between revisions of "Zaqar/pecan-evaluation"

Disclaimer: I work for Rackspace, but have no vested interest in these two frameworks. I'm new to Openstack Ecosystem, and have little to no exposure on these two frameworks prior to this evaluation. Both Ryan Petrollo (Pecan Maintainer) and Kurt Griffiths (Falcon Maintainer) have been very helpful in making me understand some of the key functional elements of these frameworks and helped me write code with best practices, without which this evaluation wouldn't have been possible.

My evaluation on these frameworks was inspired from this quote -


"When we compare tools we should be careful. Compare for understanding, not for judgement." (Henrik Kniberg, Crisp)

My experience and observations

Below is my experience and observation on working with Pecan and Falcon and it is pretty subjective. Your mileage may vary.

Pecan is an excellent micro-framework for writing a full fledged web application. There is plenty of support for templating, error pages, serialization, extensions etc. However, when I looked at how I might be using Pecan for Marconi, I realized I'm going to use Pecan to setup a ReST API and not going to be using a lot of features that Pecan offers out of the box.

Getting started off with Pecan was fairly easy. Pecan's scaffolding feature enabled me to setup a project very easily, setup initial routes using object-routing technique and got me going straight away as a standalone app. However, I had to spend a lot of time trying to fit Pecan into Marconi architecture.

Pecan also has elegant ways of creating routes and endpoints, but it can be accomplished in more than one ways. Object based routing, lookup, subcontrollers - which if not careful, can step on each other and can override.

On the other hand, it appears that Falcon has been written from ground-up with only ReSTful APIs in mind and it feels 'natural' to create routes and endpoints and bind them to Http Verbs. I got started off with Falcon fairly quickly, with minimal help, because it felt intuitive to write a ReST API. Falcon had nice little utilities that helped me parse query strings into required datatypes and specify required parameters, which was real handy.

Pecan and Falcon both have fairly good documentation (readthedocs), however I found Pecan's to be more mature. Docs and source code reading helped me wade through and understand some of these framework features easily.

Pecan pulls in quite a bit of dependencies (WebOb Mako WebTest singledispatch MarkupSafe waitress beautifulsoup4), and some of them are second level dependencies, in contrast to Falcon's (six, mime-parse). Because of the dependencies Pecan brings in, I believe Pecan has a larger attack surface. Relatively, Falcon's request and response objects are a bit more predictable and secure since it presents a lesser attack surface.

Since Pecan is a webob wrapper, some of the error messages that I encountered were from base webob objects and were a little difficult to debug. While inspecting the Pecan source code to trouble shoot those issues, I decided to look at test coverage and code complexity of these frameworks. Pecan has a fairly extensive test coverage on its framework, but when I pulled in a test coverage report, it showed 94%. On code complexity, (McCabe Score) Pecan had at least 7 instances where a segment of code had more than 8 linear independent paths. Falcon's test coverage clocked in at 100% and these was only one instance McCabe score going over 7.

Pecan's extensibility is impressive -- it has extensible templating support, security support, JSON extensions etc. It took a bit of work to fit Pecan in existing Marconi architecture, but I found it very adaptable. Marconi has been written in Falcon, hence I tried fitting Falcon into a ReST API that was written in Bottle and I was able to do that with minimal fuss.

Pecan seems to very popular in the Openstack community and has been battle tested well. Most of Openstack projects are on Pecan and it has a good community behind it. Getting help for Pecan was fairly easy. Falcon is becoming popular and has a fair number of downloads from Pypi and gaining interest in the larger python community. Falcon's github forks and stars are a good indication.

When it came to performance, I found Falcon to be faster on multiple occasions against Pecan. Especially, Falcon performed better at high concurrency rates and when the application had some data to serialize. Performance reports are available in the annexure.

I believe that major decisions need to be made based on a well-defined set of criteria, and the evaluation should be transparent and documented for future reference. Also, it must be recognized that different criterion will have different weights depending on the requirements of a specific project.

To that end, I created a decision matrix that would help choose a framework for Marconi.

For an application like Marconi where throughput and latency is of paramount importance, I recommend Falcon over Pecan. Falcon also offers a cleaner way to implement ReST APIs. Pecan definitely offers lots of features and flexibility, however looking at how many of Pecan features are used in Marconi, Pecan is probably a overkill.

I implemented Queues controller using Pecan for my evaluation and the source code can be found here. 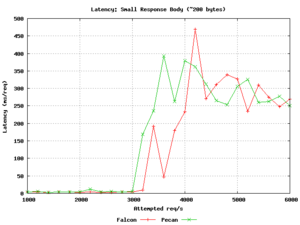 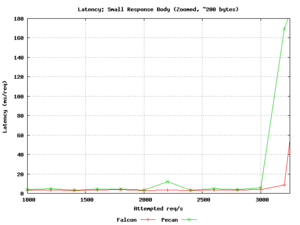 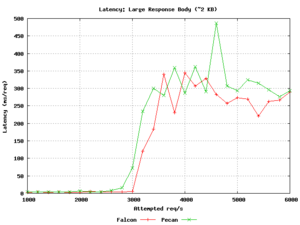 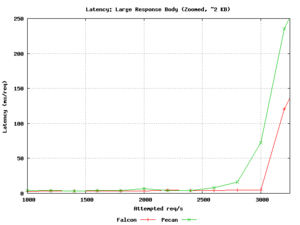 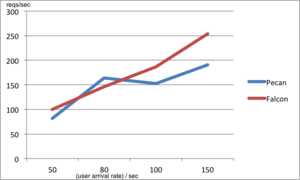 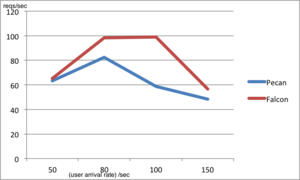 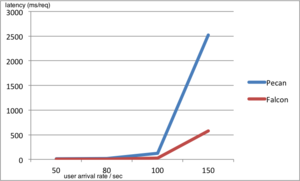 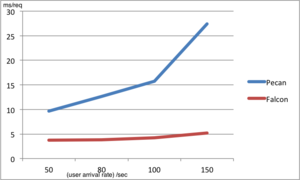