Difference between revisions of "Zaqar/How to Release"

In order to follow PEP440, we need to map OpenStack milestones to version numbers. The following mapping is proposed. Note that the interim milestone versions are only shown for 2014.1, but one can imagine them following a similar schema for subsequent development cycles.

0. Submit and merge a patch to bump the library version. Also, set an appropriate classifier in setup.cfg (i.e., "Development Status :: 4 - Beta" or "evelopment Status :: 5 - Production/Stable"). 1. Make sure the local commit you are tagging is actually present with the same SHA on the published repositories. 2. Add the release tag, for example, “0.0.1” with the following description: “Marconi client version 0.0.1”; it should be signed by your personal gpg key: 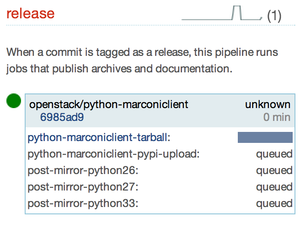