To get started, take a look at: Getting started with XenServer and OpenStack

You can find this information in the official docs: http://docs.openstack.org/trunk/openstack-compute/admin/content/introduction-to-xen.html

Introduction to using Xen, XCP and XenServer with OpenStack

In this section we will describe Xen, XCP, and XenServer, the differences between them, and how to use them with OpenStack. Xen's architecture is different from KVM's in important ways, and we discuss those differences and when each might make sense in your OpenStack cloud.

Xen is a hypervisor. It provides the fundamental isolation between virtual machines. Xen is open source (GPLv2) and is managed by Xen.org, an cross-industry organization. Xen is a component of many different products and projects. The hypervisor itself is very similar across all these projects, but the way that it is managed can be different, which can cause confusion if you're not clear which toolstack you are using. Make sure you know what toolstack you want before you get started.

Citrix XenServer is a commercial product. It is based on XCP, and exposes the same toolstack and managment API. As an analogy, think of XenServer being based on XCP in the way that Red Hat Enterprise Linux is based on Fedora. XenServer has a free version (which is very similar to XCP) and paid-for versions with additional features enabled.

Both XenServer and XCP include Xen, Linux, and the primary control daemon known as xapi.

The API shared between XCP and XenServer is called ""XenAPI"". OpenStack usually refers to XenAPI, to indicate that the integration works equally well on XCP and XenServer. Sometimes, a careless person will refer to XenServer specifically, but you can be reasonably confident that anything that works on XenServer will also work on the latest version of XCP.

A Xen host will run a number of virtual machines, VMs, or domains (the terms are synonymous on Xen). One of these is in charge of running the rest of the system, and is known as "domain 0", or "dom0". It is the first domain to boot after Xen, and owns the storage and networking hardware, the device drivers, and the primary control software. Any other VM is unprivileged, and are known as a "domU" or "guest". All customer VMs are unprivileged of course, but you should note that on Xen the OpenStack control software (nova-compute) also runs in a domU. This gives a level of security isolation between the privileged system software and the OpenStack sofware (much of which is customer-facing). This architecture is described in more detail later.

There is an ongoing project to split domain 0 into multiple privileged domains known as ""driver domains"" and <emphasis role="bold">stub domains"". This would give even better separation between critical components. This is an ongoing research project and you shouldn't worry about it right now. The current architecture just has three levels of separation: dom0, the OpenStack domU, and the completely unprivileged customer VMs.

A Xen virtual machine can be ""paravirtualized (PV)"" or ""hardware virtualized (HVM)"". This refers to the interaction between Xen, domain 0, and the guest VM's kernel. PV guests are aware of the fact that they are virtualized and will co-operate with Xen and domain 0; this gives them better performance characteristics. HVM guests are not aware of their environment, and the hardware has to pretend that they are running on an unvirtualized machine. HVM guests have the advantage that there is no need to modify the guest operating system, which is essential when running Windows.

In OpenStack, customer VMs may run in either PV or HVM mode. However, the OpenStack domU (that's the one running nova-compute) <emphasis role="bold">must"" be running in PV mode.

When you deploy OpenStack on XCP or XenServer you will get something similar to this: 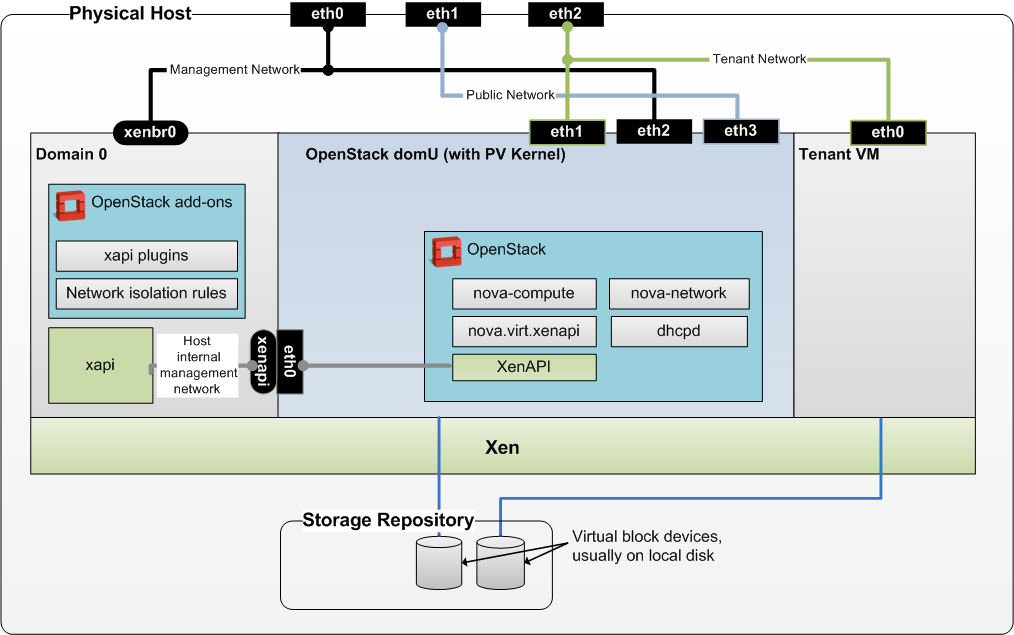 Some notes on the networking:

Another example of how to deploy OpenStack on a system with only two physical network interfaces is: 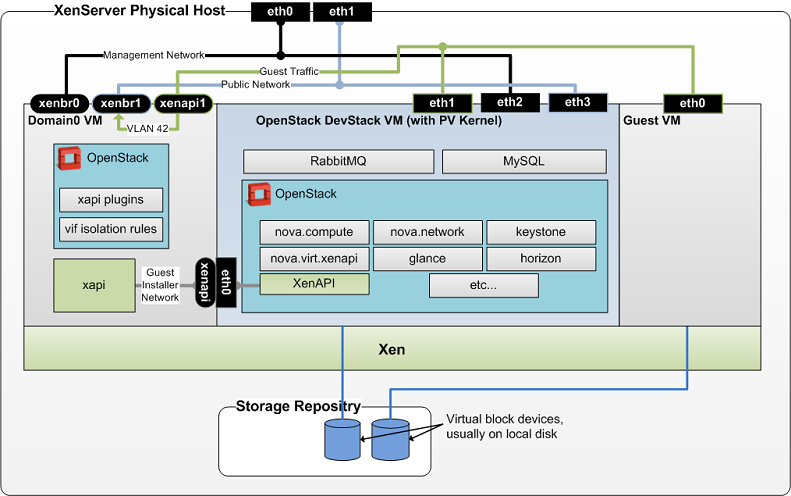 However in 2012.1 and later, the host-aggregates feature allows you to create pools of XenServer hosts (configuring shared storage is still an out of band activity). This move will enable live migration when using shared storage.

It may possible to manage Xen using libvirt. This would be necessary for any Xen-based system that isn't using the XCP toolstack, such as SUSE Linux or Oracle Linux. Unfortunately, this is not well tested or supported today, and using the XCP or XenServer toolstacks with the OpenStack XenAPI backend is the only recommended method.