Live notes were taken for this topic at: http://etherpad.openstack.org/Clustering

The sections below describe two proposed distributed architectures. The first uses a hierarchical approach and the second uses a peer-to-peer approach.

All green boxes represent pieces of software we either must write or use off the shelf. For example, the Message Queue may be Rabbit MQ, but we'll most likely need to write our own host and guest agents. All red boxes represent some form of data storage, whether it is a simple in-memory key/value cache or a relational database. The data stored in the Cluster Controller and Public API Servers will most likely be caches of a subset of the Host table data needed to make informed decisions such as where to route API requests or schedule new operations.

The Image Cache and Source will most likely leverage the existing technology such as the ibacks and Cloud Files, but it should be kept generic so other (possibly external) image sources are supported. For example, a user may wish to specify an arbitrary URI to pull a custom image from.

At a high level, this approach would be similar to how DNS works, there is some set of Public API Servers that the Cluster Controllers register with and requests coming into these API servers are routed to the appropriate Cluster (or multi-cast to many Clusters) to answer queries. Depending on how much data we can effectively cache from the Clusters at this layer, we should be able to answer some subset of queries directly without forwarding onto the Clusters directly. This allows the Cluster Controllers to act as an aggregation layer for all Hosts within a Cluster, so only 2-3 Cluster Controllers need to register with the Public API Servers (not every Host). This architecture will require at least four logical APIs, but they may share code in implementation. These are:

The requests may be answered at any layer if the information is available and up to date. In the case of a simple one-cluster setup, you could start Public API Servers alongside the Cluster Controllers. 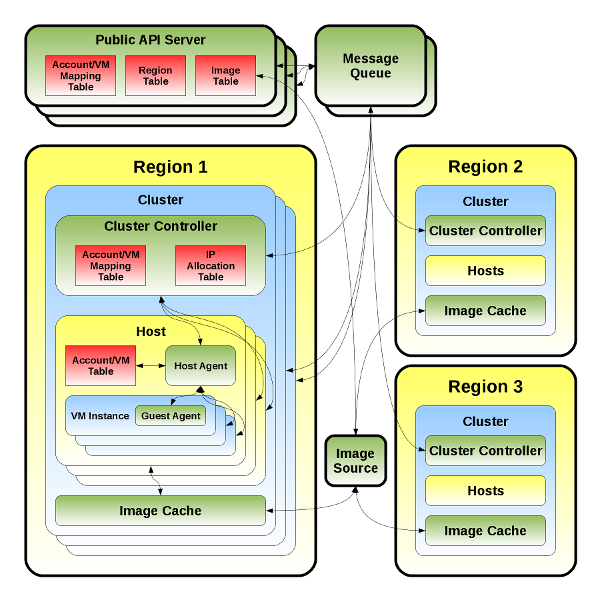 The original Open Office Draw file can be found at: attachment:cloud_servers_v2.odg

A peer-to-peer model would look more like SMTP, IRC, or even some network routing protocols (BGP, RIP, ...). This would allow Cluster Controllers to peer with one another and they would advertise what resources are available locally or to their other peers through aggregated resource notifications. The graph of Clusters would not need to be complete (fully connected), it could be loosely connected. The Public API Servers and Cluster Controller are logically separate in their function, but could be combined into the same piece of software. This combination would speak both the Public API and the peering API and could either answer the request directly or route it to the cluster that can answer it. This may take the form of a proxied request or a redirect. For example, if the request came in as a HTTP request, a 301 or 302 Redirect response could be sent with the appropriate cluster to contact. 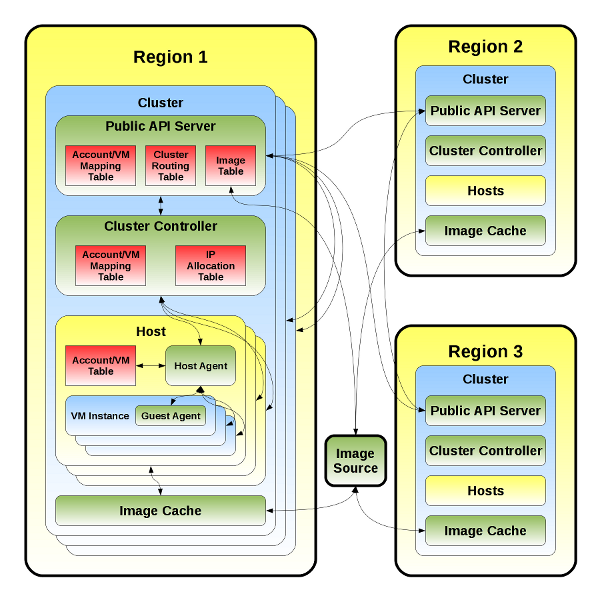 The original Open Office Draw file can be found at: attachment:cloud_servers_v2_peer.odg