Difference between revisions of "NetworkServicePOC"

Finally, it should be noted that despite these changes, all the currently available features should work the same way as they do now.

Network services should be implemented in a pluggable manner so that various types of network service can be used with Nova. 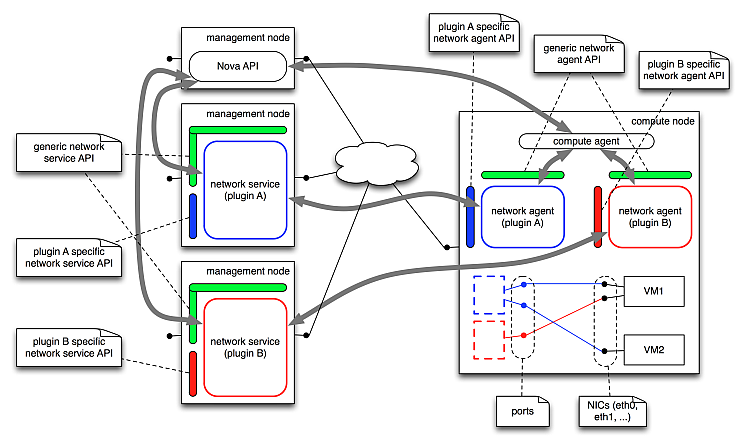 A pluggable network service is typically broken up into the following three parts:

Management of the networks, such as creating networks, allocating IPs and virtual NICs are all accomplished through net-api. All the network-related code that currently exist in the compute code are moved to net-agent, thereby decoupling compute from the network services. Since net-service is optional, Nova does not have any knowledge of its existence. Only net-api and net-agent may access net-service. For example, for nova-compute to request a service from net-service, it must go through net-agent.

Nova currently comes with three types of network managers: VlanManager, FlatManager andFlatDHCPManager. These are converted into separate plugins in the new model. These plugins are defined in 'nova/networks' directory as distinct modules. The actual paths of these plugin modules are:

The networking in OpenStack consists of the following main concepts:

It is assumed that a VM instance is allowed to have multiple VNICs associated with it, with each one connecting to a port that belongs to different networks.

All the network management is done through the REST API implemented by each plugin. In this proposal, only the OpenStack API is applicable. The EC2 API still works the same way as before, but it does not support multiple NICs for an instance.

Each plugin has its own REST API URL that contains its name in the path. The format of the URL is: http://server:port/version/plugin_name/...

Flat, FlatDHCP and VLAN define the same APIs. They are:

The request and response formats are up to the plugins. They should, however, support both JSON and XML.

The routes for these APIs are set by the plugins themselves. The way this is accomplished is explained in the implementation section below.

Note: There is work being done for the new OpenStack Compute API(version 1.1). It is important to keep the network APIs in sync with the new design. (At the time of this writing, it is NOT in sync).

The actual data for virtual NICs, networks and ports are all plugin-specific, and therefore they belong in the data storage. If the plugin uses SQL as its data store, then it is the plugin's responsibility to define the migration scripts, data models and DB APIs.

For VLAN, Flat and FlatDHCP, a virtual NIC is an ethernet card, a port is a fixed IP, and a network is the same as that of the current Nova implementation.

network commands in nova-manage are obsolete as all the network management commands are moved to the plugin-specific management tool scripts.

In the Nova DB, the following new tables are added:

In the VLAN, FlatDHCP and Flat plugins have EthernetCards table which represents the VNIC:

These generic APIs are:

All the net agent APIs are generic.