Difference between revisions of "Murano/SimplifiedMetadataRepository" 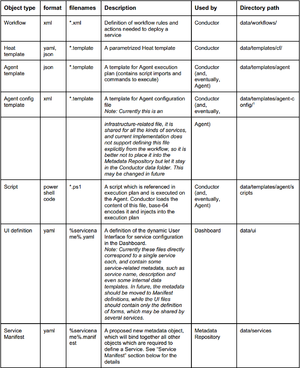 When processing the services for either of these calls, the Repository should act in a service-driven manner, according to the following algorithm: Iterate over the files in data/services directory, open all manifest files, parse them, process (filtering by the manifest version, if needed) their contents, checking for “enabled” flag. For each enabled service create a separate list of the referenced file names For each filename in each list, validate that the file is present in the repository. If at least one file is not present, empty the whole list corresponding to this service. Join the non-empty filelists into a single set of filenames (without duplicates) Built the resulting archive from this set of filenames

API defined in p 9.4 should comply to the same rules as APIs defined in p8: its usage should invalidate all caches and should be synchronized with read-operations.

Implementing batch operations with services (0.1.6) The final planned delivery of simple Metadata Repository will add the Service Catalog functionality defined in p9. Most useful features will be ability to dowloan entire service package (p9.3) and upload such package to a different repository (p 9.4)