The overall design was inspired partly by [1], partly by Solum [2], partly by some [3] about Murano’s dynamic UI. 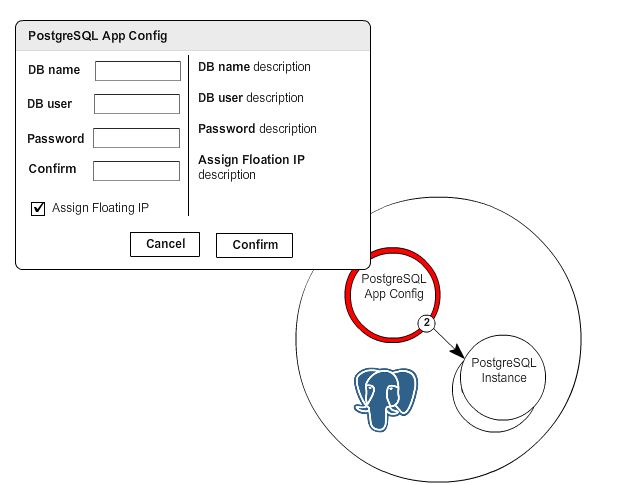 The proposed UI is centered around the concept of ‘Component’ - the smallest visual element on the canvas (shown as a circle). There is also an ‘Application’ entity that could include several components, although it is quite normal to have single-component application. Each component includes several configuration parameters, as well as their validation and transformation logic. Upon clicking on a component a configuration form appears where one can specify all the parameters the component consists of, as well as their descriptions. The reasons for dividing an application into several components are:

To distinguish components with valid data from the ones with invalid data a color coding is used: green outline for valid ones, red for invalid. 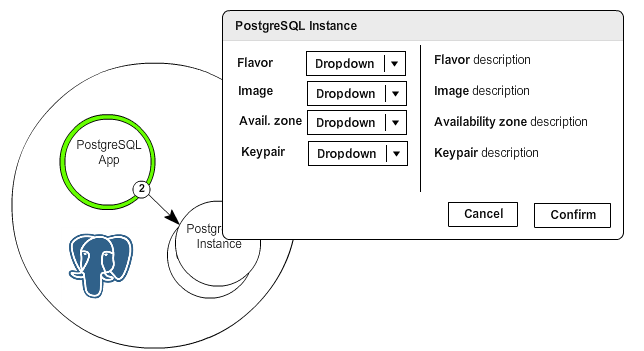 While ‘PostgreSQL Instance’ and ‘Apache Instance’ components are located within their applications (thus the values one can specify for those instances are subject to the appropriate application’s constraints), it is not a must-requirement for, e.g. an Apache application to use its own instance - it can also use some ‘Generic Instance’, which has less constraints and is less useful. 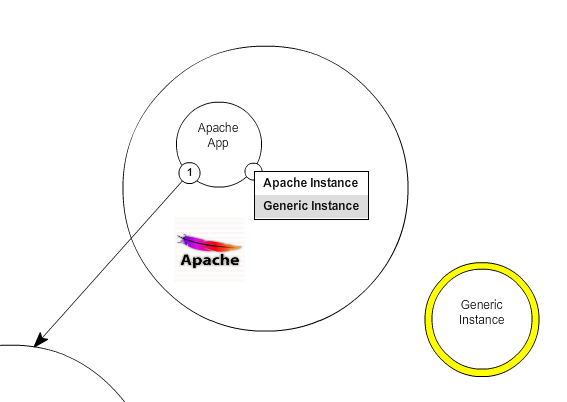 The components may be connected with each other or with other applications. For this purpose the ‘Connector’ entity (small circle on the rim of component) exist. Initially, when a single component is added to a canvas, its only connector is empty. Once the user clicks it, a list menu appears, where all possible targets for a connection can be specified (another option here is to filter components in the left side panel). After selecting the target component type the source component can be connected either to one of the compatible existing components on the canvas (they will be highlighted) or to the component-less canvas space which will lead the creation of new component of that type on that place. After the link has been established, another empty connector appears on the rim of the component - if it can be still connected to other entities. For an existing link, a number of identical components (e.g., PostgreSQL Instances) can be set - a spinner menu appears after clicking on the instantiated connector. When a multi-component application is added to the canvas, it may have some predefined connections. 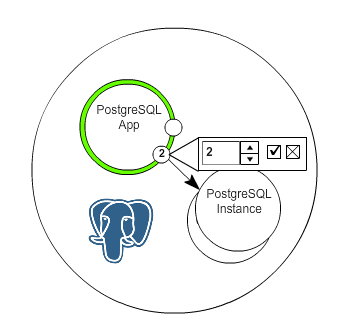