Difference between revisions of "Magnum"

Magnum is an OpenStack API service developed by the OpenStack Containers Team making container orchestration engines such as Docker and Kubernetes available as first class resources in OpenStack. Magnum uses Heat to orchestrate an OS image which contains Docker and Kubernetes and runs that image in either virtual machines or bare metal in a cluster configuration. Click below for a 5 minute demo of how Magnum works. 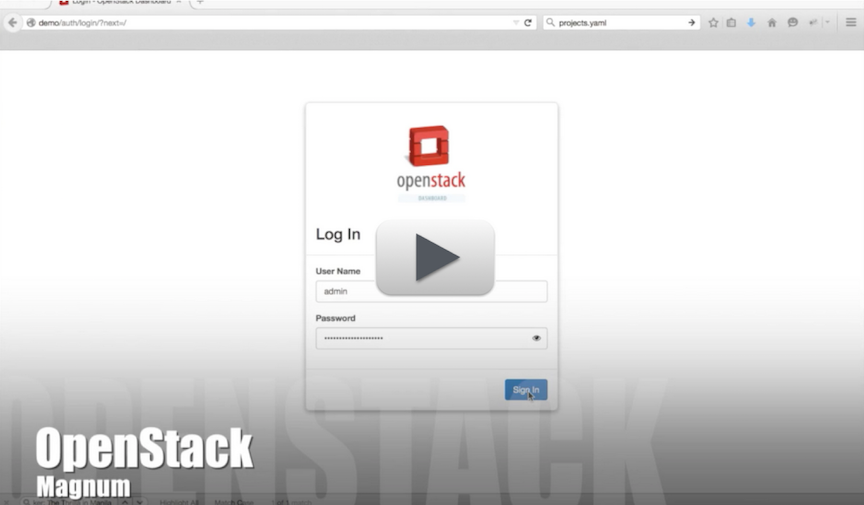 To get started with Magnum, see: Our Quickstart Guide

The project is under active development by our OpenStack Containers Team. We meet weekly by IRC. Magnum's meetings are normally chaired by our PTL Adrian Otto.

Our developers use IRC in #openstack-containers on freenode for development discussion.

1) How is Magnum is different from Nova?

2) How is Magnum different than Docker or Kubernetes?

Magnum offers an asynchronous API that's compatible with Keystone, and a complete multi-tenancy implementation. It does not perform orchestration internally, and instead relies on OpenStack Orchestration. Magnum does leverage both Kubernetes and Docker as components.

3) Is this the same thing as Nova-Docker?

No, Nova-Docker is a virt driver for Nova that allows containers to be created as Nova instances. This is suitable for use cases when you want to treat a container like a lightweight machine. Magnum provides container specific features that are beyond the scope of Nova's API, and implements its own API to surface these features in a way that is consistent with other OpenStack services. Containers started by Magnum are run on top of Nova instances that are created using Heat.

Magnum is for OpenStack cloud operators (public or private) who want to offer a self-service solution to provide containers to their cloud users as a managed hosted service. Magnum simplifies the required integration with OpenStack, and allows for cloud users who can already launch cloud resources such as Nova Instances, Cinder Volumes, Trove Databases, etc. to also create application containers to run applications in an environment that provides advanced features that are beyond the scope of existing cloud resources. The same identity credentials used to create IaaS resources can be used to run containerized applications using Magnum. Some examples of advanced features available with Magnum are the ability to scale an application to a specified number of instances, to cause your application to automatically re-spawn an instance in the event of a failure, and to pack applications together more tightly than would be possible using Virtual Machines.

5) Will I get the same thing if I use the Docker resource in Heat?

No, the Docker Heat resource does not provide a resource scheduler, or a choice of container technology used. It is specific to Docker, and uses Glance to store container images. It does not currently allow for layered image features, which can cause containers to take longer to start than if layered images are used with a locally cached base image. Magnum leverages all of the speed benefits that Docker offers.

6) What does multi-tenancy mean in Magnum (Is Magnum Secure)?

Resources such as Containers, Services, Pods, Bays, etc. started by Magnum can only be viewed and accessed by users of the tenant that created them. Bays are not shared, meaning that containers will not run on the same kernel as neighboring tenants. This is a key security feature that allows containers belonging to the same tenant to be tightly packed within the same Pods and Bays, but runs separate kernels (in separate Nova Instances) between different tenants. This is different than using a system like Kubernetes without Magnum, which is intended to be used only by a single tenant, and leaves the security isolation design up to the implementer. Using Magnum provides the same level of security isolation as Nova provides when running Virtual Machines belonging to different tenants on the same compute nodes.