Difference between revisions of "HeterogeneousTileraSupport"

This blueprint proposes to add support for the Tilera tiled-processor machines as an alternative machine type in OpenStack. This blueprint is dependent on the schema changes described in the HeterogeneousInstanceTypes blueprint and the scheduler in HeterogeneousArchitectureScheduler.

The target release for this is Essex:

The folsom branch is here:

This blueprint is related to the HeterogeneousInstanceTypes blueprint here:

We are also drafting blueprints for other machine types:

An etherpad for discussion of this blueprint is available at http://etherpad.openstack.org/heterogeneoustilerasupport

Nova has been extended to support non-virtualizable architecture, as an example, Tilera TILEmpower Platform (TILEPro64 Processor).

This blueprint is dependent on tp64.8x8 being a selectable instance type and that the scheduler knows this instance must get routed to a TILEmpower board. See HeterogeneousArchitectureScheduler.

Some (non-x86 based) machine architectures of interest to technical computing users have either poor or non-existent support for virtualization. For example, our heterogeneous target, Tilera Linux (MDE-3.0) does not yet support KVM or Xen virtualization.

One alternative to using virtualization to provision hardware in a cloud environment is to do bare-metal provisioning: rebooting the machine to a fresh system image before handing over control to the user, and wiping the local hard drive when the user is done with the resources.

To support the Tilera architecture through OpenStack, we developed a proxy compute node implementation, where our customized nova-compute service acts as a front-end that proxies requests for nodes to a Tilera-specific back-end that does the bare metal provisioning of the nodes as needed.

Our intention is to ultimately support different provisioning back-ends. Several provisioning tools are available, such as Dell's crowbar, as an extension of opscode's Chef system, Argonne National Lab's Heckle, xCat, Perceus, OSCAR, and ROCKS. These tools provide different bare-metal provisioning, deployment, resource management, and authentication methods for different architectures. These tools use standard interfaces such as PXE (Preboot Execution Environment) boot and IPMI (Intelligent Platform Management Interface) power cycle management module. For boards that do not support PXE and IPMI, such as the TILEmpower board, specific back ends must be written. 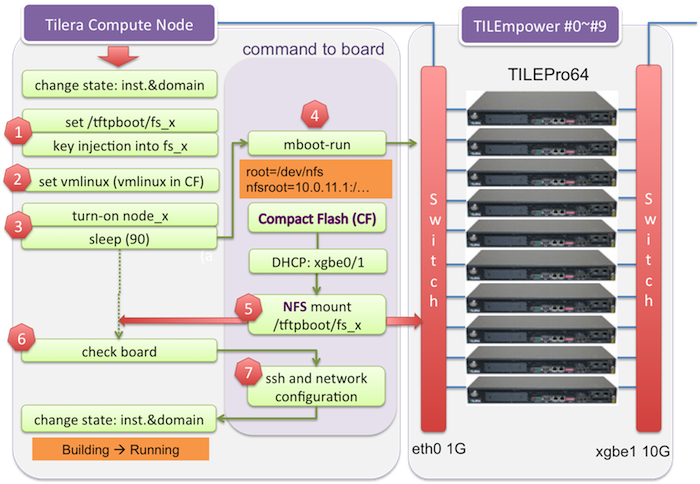 For option2 below, the x means the board_id and 1 means the first boot with vmlinux image which sets TLR_ROOT=tmpfs. By default the rootfs is copied to a tmpfs whose size limit is half of total memory. After 1st mboot-run through tftp download of vmlinux, Proxy Compute Node uploads compressed tilera file system into memory, mounts /dev/sda1 to /mnt, and uncompresses the uploaded tilera file system into /mnt disk space. And then Proxy Compute Node copies vmlinux_x_2 to vmlinux_x. The x means the board_id and 2 means the second boot with vmlinux image which sets TLR_ROOT=/dev/sda1. After second mboot-run, rootfs is set as /dev/sda1. After that, Proxy Compute Node sets the status of instance and domain as Running. Then user can access the board through ssh. 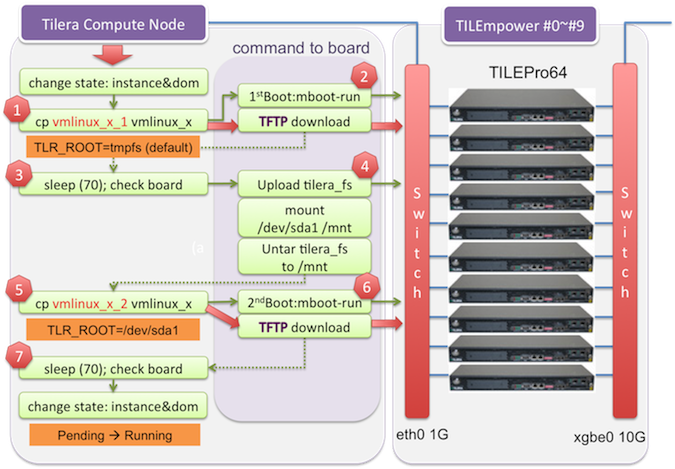 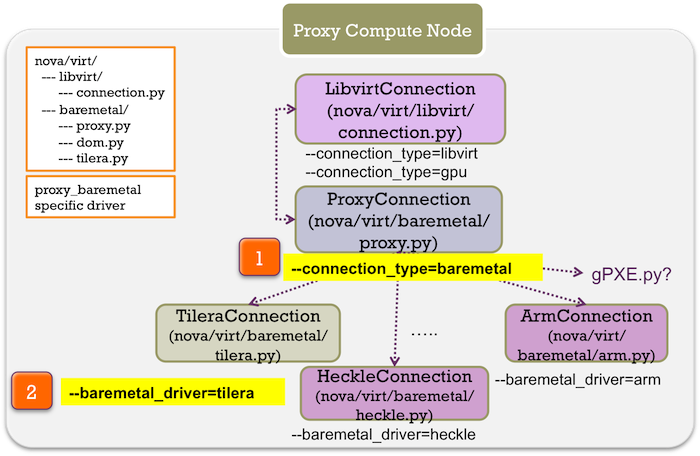 The following will be available as new default instance types.

(Only one Tilera instance type for now. When KVM support appears, we will add additional types to support partitioning into smaller instances)

These codes are already merged into nova upstream.

Most of the nova.conf options are shown at:

For tilera bare-metal driver, you'll need to set your options in nova.conf as follows:

Very little needs to change in terms of the way deployments will use this if we set sane defaults like "x86_64" as assumed today.

One of the challenges we have is that the flavorid field in the instance_types table isn't auto-increment. We've selected high numbers to avoid collisions, but the community should discuss how flavorid behaves and the best approach for adding future new instance types.