Difference between revisions of "Governance/Foundation/IncubationUpdate2013"

The Incubation Update Committee (IncUp) has completed the assigned analysis of the Incubation process and definition of core and offers the following report with recommendations to the OpenStack Technical Committee (TC) and OpenStack Board of Directors (Board).

Perceptions around the current defined Incubator process have grown to infer that a project must either graduate to the status of an OpenStack Core Project (Core) or it must eventually fail to make progress or become abandoned. This committee was born from the need to change that perception and update the incubator process. Perception is changing due to the actions we've already put in place. The OpenStack community will grow to contain many projects critical to the success of OpenStack but in which it will not be prudent nor necessary to be destined for Core.

Since the bylaws define that the TC exercises the authority to add, combine, delete, or split modules from the OpenStack Project and as it is the responsibility of the Board to approve or reject additions, combinations, splits and deletions from the Core OpenStack Project it is important to update the current Incubator process to enable and promote efforts within the community while facilitating the TC and Board to work together for the proper advancement of OpenStack technologies.

Software that is included within the OpenStack project is generally described at:

Working together the committee examined the current incubator process. The scope of the effort was defined as:

Within OpenStack there are essentially two governance bodies, the Technical Committee (TC) and OpenStack Board (Board). Project status/labels include Incubation and Core. This proposal adds Integrated. Each of these are explained in the diagram and subsequent sections of this document.

The TC will manage the Incubation and Integrated project labels. Note that the TC has already begun to apply the Integrated label, specifically to the Ceilometer and Heat projects which graduated from Incubation in February.

The current list of incubated, integrated and core projects:

Ceilometer and Heat were recently graduated from Incubation and are considered Integrated projects.

There are no project in incubation at this time. 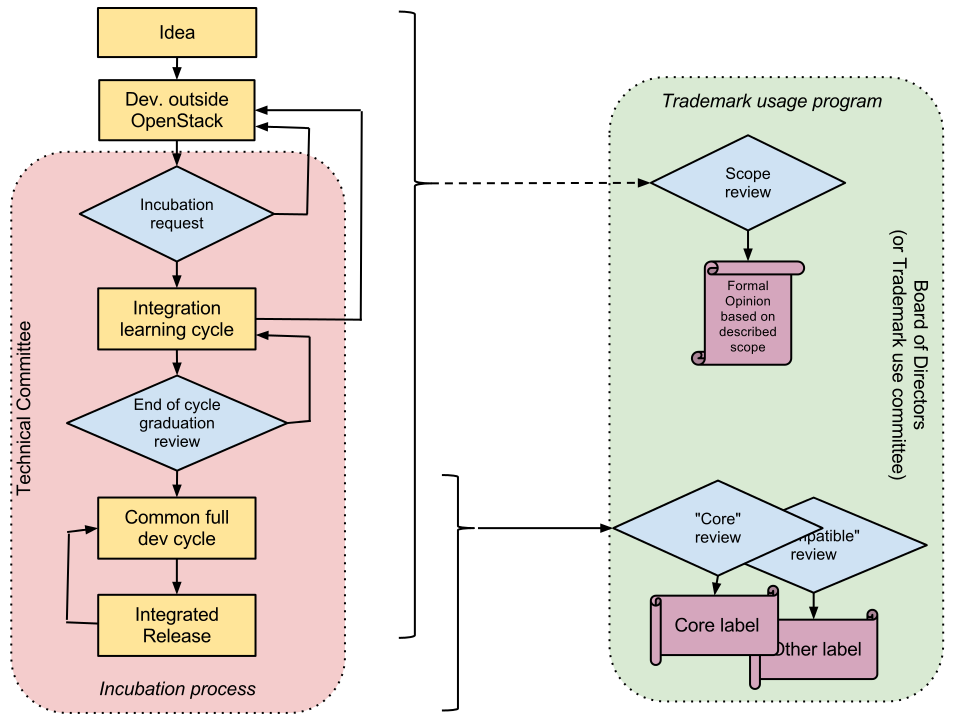 Note that library projects and supporting projects do not go through incubation but should undergo many of the same steps, gating and processes including trademark review.

New Projects to the OpenStack Community

The process is outlined within the following wiki page:

It is common practice today for projects to use a 'project name' such as Ceilometer and Heat. The guidelines for documentation is to use a descriptive name, not the project name, as much as possible.

As projects grow and progress, they need to adopt a descriptive service name. It is recommended that each project undergo a formal trademark search as early as possible and that such a search is required prior to a project graduating from Incubation. Determining a descriptive service name should be handle in conjunction with the Trademark usage program. Typically the project will be called OpenStack X when it becomes part of the integrated release. Therefore Ceilometer and Heat will become OpenStack Metering and OpenStack Orchestration (starting with the Havana cycle).

The new project process includes references to the Incubation process. Incubation is the process managed by the TC through which a project becomes part of the coordinated, integrated OpenStack release. Projects apply to the TC to join Incubation. Their "incubation request" is assessed by the TC on the basis of the project's technical maturity and the appropriateness of its scope. The incubation process is defined at:

As the Incubation page outlines, to enter the incubation process the project submits the following application:

Prior to Incubation projects are able to utilize the following OpenStack resources:

Resources used from OpenStack as part of the incubation process:

By end of incubation the project should be able to be part of the devstack integration testing gate, meaning it should consistently work with and not break the other projects.

Projects which complete Incubation and which are part of a coordinated release will be referred to as "Integrated" in that release. Previously this was one of the meanings of the term "Core".

At the end of every development cycle, before PTL elections are held, the TC carries out an "end of cycle graduation review" of the projects currently in Incubation. Projects will graduate from Incubation if they are considered mature, stable in design, complementary in scope and well aligned to the development cycle and processes. Graduating projects will be part of the next development cycle and fully "Integrated" in subsequent releases. Under the current 6 month release cycle, this means a graduating project will be Integrated in the release 8 months after the TC deems it ready to graduate from Incubation.

Resources used from OpenStack to support Integrated (and Core) projects:

will be updated to replace the word "core" with "integrated" as per the policy outlined in this section. The effect of this change will be that PTLs for projects graduating from Incubation will be automatically granted a seat on the next TC.

[Note: those last two items were already implemented as part of the interim resolutions needed to proceed with the Grizzly end of cycle graduation review]

Core is a label the Board can attach to a project that is part of the regular integrated release.

The criterion that the board will use to guide a decision on whether to apply the Core label to an Integrated project of good standing are as follows:

To arrive at the core criteria and other recommendations outlined in this report, the IncUp committee generated and reviewed several use cases:

Those use cases are currently stored on the IncUp etherpad.

Conclusion – Board and TC Requested Actions

From the IncUp efforts and recommendations approved at the February board meeting the TC has begun to apply the Integrated term in their efforts. Specifically Ceilometer and Heat have completed the Incubation process to Integrated status.

IncUp invites the board and TC to review and approve the recommendations in a joint meeting. If that is not feasible, then when the board has completed it's review IncUp will invite the TC to conduct a similar review. At that point the IncUp committee will implement the recommendations outlined within this report and will then consider the committee effort complete and will disband.