From the beginning of the Ceilometer project, a large part of the goal was to store time series data that were collected. In the early stages of the project, it wasn't really clear what and how these time series were going to be handled, manipulated and queried, so the data model used by Ceilometer was very flexible. That ended up being really powerful and handy, but the resulting performance has been terrible, to a point where storing a large amount of metrics on several weeks is really hard to achieve without having the data storage backend collapsing.

Having such a flexible data model and query system is great, but in the end users are doing the same request over and over and the use cases that need to be addressed are a subset of that data model. On the other hand, some queries and use cases are not solved by the current data model, either because they are not easy to be expressed or because they are just too damn slow to run.

Considering the amount of data and metrics Ceilometer generates and has to store, a new strategy and a rethinking of the problem was needed, so Gnocchi is a try on that.

So that left us with two different problem to solve: Store metrics and store information (the so called metadata) about resources.

It provides a REST API. The REST API provides two types of resources:

Here's how the software is architected. 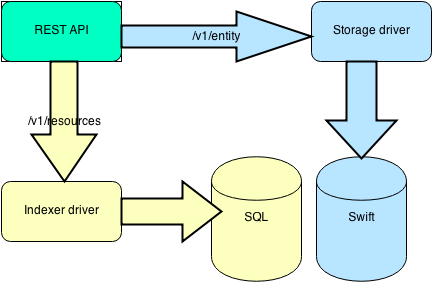 The two types of objects managed and provided by Gnocchi are stored in two different data stores, because these two types of things are definitely different. Relying on the same type of data storage would break things, just like what we saw in Ceilometer.

The storage driver is in charge of storing the metric in an aggregated manner. Yes that means you aggregate according to what the user requested when they created the entity, before you store the metrics.

Swift provides an almost infinite of space to store data, is likely already part of your cloud (so it's not something else to deploy for your operators) and it is very scalable.

The canonical implementation is based on SQLAlchemy, just because SQL is fast, indexable, etc. So it's a great storage for that. And SQL is already deployed in your OpenStack environment, so again: It's not yet another thing to deploy.

The plan is to describe some resources (instances, images, etc) so they have real schemas that can be indexed and queried efficiently.

The API is still evolving for now. We currently have this: