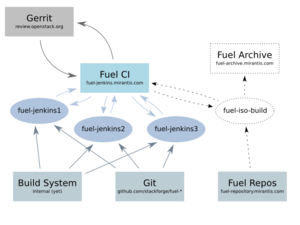 Fuel project uses the Openstack Gerrit infrustructure and follows its Gerrit workflow, though instead of rinning tests via Zuul and Co we use just Jenkins.

There is one Jenkins master node http://fuel-jenkins.mirantis.com which is connected to Openstack Gerrit via Gerrit Trigger plugin using service account Fuel CI.

There are several slaves (three at the moment), all running Ubuntu 14.04. They are similar in configuration, though fuel-jenkins2 is slightly slower with disk I/O.

The heaviest tests are those for fuel-library changes. Each commit to fuel-library repo run two deployments with three virtual machines each. These jobs use preconfigured environment (master node is already deployed and three slaves enabled) and don't do clean start for every run, which may affect the result.