Additional definitions were crafted at the Dublin meeting.

There are at least three use cases related to this (e.g. vRAN, NFV, MEC). While the use cases are different, the expectation is that they will run on the same infrastructure. So it makes sense to treat them together. Case 1: 1- vRAN: Here the l focus on virtual Baseband Unit (BBU) which has stringent requirements on processing for timing controls with 'remote radio heads' 2- NFV: Here the focus is on running the Core applications as virtual machines at the edge. This includes, vEPC elements, vRouters, Virtual Firewall (vFW), Virtual Load Balancer (vLB). 3- MEC: Here the focus is on running 3rd party or operator applications at the edge. The MEC resource pools could be supporting a variety of other MEC applications (smart city, v2x, consumer AR).

Case 2: By splitting CU-DU (from BBU), vCU can run on the same NFVI edge computing platform that runs UPF(5G) ( or S/P-GW-U in 4G) and other VNFs including vFW and vLB. End users/devices traffic can be released at the clear demarcation point placing UPF in Edge DC. We can install Kubernetes based cloud on top of NFVI and put UPF(and other VNFs) in front of Kubernetes to carry the user's traffic to cloud native apps in the Kubernetes.

Case 2: 1) Edge Cloud B2B2X model In the traditional Telco service provider model, the Telco provided services(the first B of B2B2X) directly to either individual or corporate consumers to increase revenue. In the Edge Cloud B2B2X model, Telco collaborates with diverse partners in other industries(the second B of B2B2X)to deliver added value to consumers/devices(X of B2B2X) through a wide range of the biz service providers. Here, the value that Telco Edge Cloud can provide biz service providers can take various forms, such as IoT & Edge Intelligence, Containerized micro service, AI framework, and other advanced ICT technologies, user interface technologies, and security tools.

Communication Service Providers (CommSPs) see uCPE platforms as an opportunity to “expand the range of choices available to our customers, accelerate the enterprise transformation to cloud based architectures, and increase the agility of organizations to respond to market challenges.” Enterprises want the ability to mix and match VNFs depending on what functions are needed at each Enterprise location and based on vendor preferences.

"uCPE" (universal) is not to be confused with vCPE (virtual) where CPE functions run in the service provider network on virtualized platforms.

VNFs or other applications that run on the uCPE will usually be provisioned and managed by the Enterprise as part of their business network infrastructure. For example firewall rules managed by Enterprise IT.

From the perspective of the Enterprise IT their customers are the end-users (i.e. users of the network services are employees, departments, branch offices, etc.)

Description of the use case in detail.

These are high level requirements based on the different use cases not tight to specific OpenStack infrastructure requirements due to my limited understanding of the OpenStack architecture.

XunanKab Version 0.1 is ready which includes the deployment of the use case through Docker container infrastructure with the following components:

A Cloud Storage Gateway is when data (in some form further defined below) is stored in an edge location or device and shared either with other shared data remote locations. It is assumed that the storage communicates with a Cloud Service Provider (CSP) storage service at the core; however this is not strictly required to meet the use case criteria. Examples with a core storage location include: AWS S3 Storage Gateway, Microsoft Avere Flash Cloud..

The use case requirement is to allow a CSP storage service to extend the storage out to the Edge appliance or uCPE that has the ability to store some amount of data locally, but still communicate to the central repository. Need to support VTL, Volume, Object Store and File type data storage. The data can be generated from the cloud to the Edge ( Gaming, Video Streaming, etc.) or generated from Edge back to Cloud (data archiving of records, IoT, Augmented Reality, backup, etc.) or in both directions. Need for low latency/high performance network (IoT, gaming, etc.). Moving IoT over cellular/5G networks storage requirements: Cache what is needed locally. Storage would need to be sized based on density of area covered and type of data.

Glance -- centralized or Glance controller at the edge nodes to manage storage instance. Need to look at meta data between Glance/Nova. When lots of data is stored at the edge, data storage application implies that the data is processed in some way at the edge -- think IoT data compression or first pass at analytics at the local site.

Enable OpenStack to support standards based open caching workloads at the edge.

The output from this subgroup is a collection of documents that define:

To quote the Open Cache Functional Requirements abstract an Open Cache Solution is:
A distributed architecture leveraging common compute and storage resources deployed at the network edge in close proximity to consumers. The open caching layer establishes a universal delivery layer operating across a range of content provider and used as an extension of the existing content delivery infrastructure.

The Open Caching standard is gaining popularity among Content Delivery Networks (CDNs) in a move towards standardization and away from proprietary technology. Essential difference between storage and caching is that with caching, the data is not processed, but stored for use in its final state. Store and forward is an example of caching use. High availability of the data could be populated from adjacent edge locations or from the central core store.

Relationship between distance, latency and quality 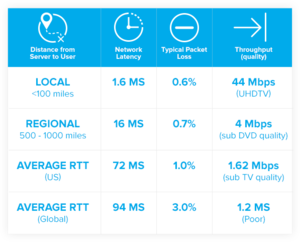 An horizontal platform for most, if not all, Smart City verticals: extending OpenStack to support the I/Ocloud [1] paradigm through sensor/actuator-hosting far-Edge/IoT nodes, and thus enable the Software-Defined City [2] approach

A network of nodes that allow people to share immercive gaming experiences. Assume that the nodes are using end user consoles to deliver the servcies.

Broadband, LTE depending on if home based, retail or on a tablet/cellphone

5 9's, be able to work in some fashion locally while off line.

No regulatory requirements, but need to protect PCI, GDPR for players, physical security

Provide a 1 sentence - 1 paragraph summary of the business case.

Since edge devices can also produce terabytes of data, taking the analytics closer to the source of the data on the edge can be more cost-effective by analyzing data near the source and only sending small batches of condensed information back to the centralized systems.

Offloads the VPN service so that the endpoints are as close to the users as possible.

IoT, where data is often collected from a large network of microsites, is an example of an application that benefits from the edge computing model. Sending masses of data over often limited network connections to an analytics engine located in a centralized data center is counterproductive; it may not be responsive enough, could contribute to excessive latency, and wastes precious bandwidth. Since edge devices can also produce terabytes of data, taking the analytics closer to the source of the data on the edge can be more cost-effective by analyzing data near the source and only sending small batches of condensed information back to the centralized systems. There is a tradeoff here—balancing the cost of transporting data to the core against losing some information.

Unfortunately, as edge devices proliferate––including mobile handsets and IoT sensors––new attack vectors are emerging that take advantage of the proliferation of endpoints. Edge computing offers the ability to move security elements closer to the originating source of attack, enables higher performance security applications, and increases the number of layers that help defend the core against breaches and risk.

Compliance covers a broad range of requirements, ranging from geofencing, data sovereignty, and copyright enforcement. Restricting access to data based on geography and political boundaries, limiting data streams depending on copyright limitations, and storing data in places with specific regulations are all achievable and enforceable with edge computing infrastructure.

Real-time applications, such as AR/VR, connected cars, telemedicine, tactile internet Industry 4.0 and smart cities, are unable to tolerate more than a few milliseconds of latency and can be extremely sensitive to jitter, or latency variation. As an example, connected cars will require low latency and high bandwidth, and depend on computation and content caching near the user, making edge capacity a necessity. In many scenarios, particularly where closed-loop automation is used to maintain high availability, response times in tens of milliseconds are needed, and cannot be met without edge computing infrastructure.

Edge computing expands bandwidth capabilities, unlocking the potential of new immersive applications. Some of these include AR/VR, 4K video, and 360° imaging for verticals like healthcare. Caching and optimizing content at the edge is already becoming a necessity since protocols like TCP don’t respond well to sudden changes in radio network traffic. Edge computing infrastructure, tied into real-time access to radio/network information can reduce stalls and delays in video by up to 20% during peak viewing hours, and can also vary the video feed bitrate based on radio conditions.

Many applications are not sensitive to latency and do not require large amounts of nearby compute or storage capacity, so they could theoretically run in a centralized cloud, but the bandwidth requirements and/or compute requirements may still make edge computing a more efficient approach. Some of these workloads are common today, including video surveillance and IoT gateways, while others, including facial recognition and vehicle number plate recognition, are emerging capabilities. With many of these, the edge computing infrastructure not only reduces bandwidth requirements, but can also provide a platform for functions that enable the value of the application—for example, video surveillance motion detection and threat recognition. In many of these applications, 90% of the data is routine and irrelevant, so sending it to a centralized cloud is prohibitively expensive and wasteful of often scarce network bandwidth. It makes more sense to sort the data at the edge for anomalies and changes, and only report on the actionable data.

Many environments, even today, have limited, unreliable or unpredictable connectivity. These could include transportation (planes, buses, ships), mining operations (oil rigs, pipelines, mines), power infrastructure (wind farms, solar power plants), and even environments that should typically have good connectivity, like stores. Edge computing neatly supports such environments by allowing sites to remain semi-autonomous and functional when needed or when the network connectivity is not available. The best example of this approach is the need for retail locations to maintain their point of sales (POS) systems, even when there is temporarily no network connectivity.